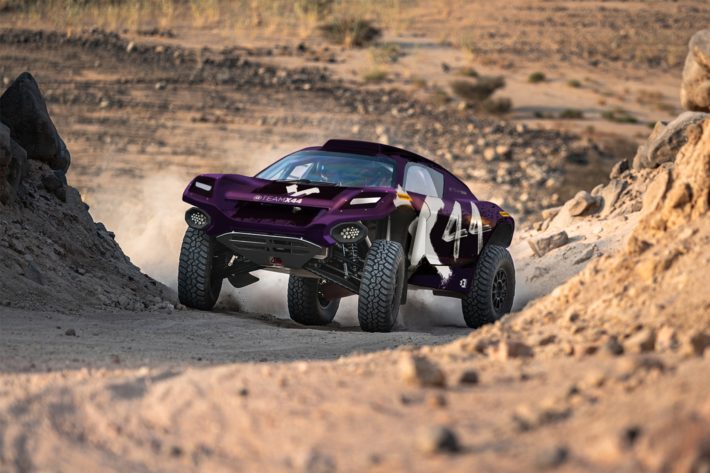 Any F1 fan who chanced upon the recent announcement of a new and very different race team might idly have thought, “Oh, X44… That’s like Lewis Hamilton’s race number” … 44.

I admit, I did then read on to find that Lewis Hamilton had committed himself to an involvement with this new competition… but not as a driver.

A brand new team. A brand new tournament. We’re hoping you’re as pumped as we are… Make sure to hit that follow button and follow our journey, racing in some of the most extreme global locations, whilst driving positive change for the world 🗺#TeamX44 pic.twitter.com/KGoKOJW3A0

Launched in January by Alejandro Agag who brought us Formula E in 2014 – a series which has gone from strength to strength – Extreme E takes teams of electric all-terrain SUVs to a series of races around the globe, focusing not on massively wealthy states but on nations struggling on the edge of global warming, affected by climate changes now that, without action, will soon engulf us all.

Lewis announced he will head the new team, X44, which is both a vehicle for his team leadership aspirations, and utilising his position to campaign on social issues, most recently demonstrated chivying the FIA and F1 race promoters into acknowledging that black lives do matter in a very visible demonstration before every Grand Prix.

So proud to finally announce @teamx44⚡️
Team X44 will be joining the @extremeelive series and I’m really excited to share this project with you. It will be fun to have a different role from being the team driver. /1 pic.twitter.com/wWY5svinGg

With 89 (and probably, by the time you read this, more) race wins and 6 World Championships, Lewis has not shown a desire to race in anything but F1 since 2007, but this new challenge has meshed with a growing awareness of his potential power to influence social changes. Lewis specified that the series appeals “because of its environmental focus”.

The weekend’s format sounds complicated, and, some might suggest, overly so…:

“Each race, which will be known as an X Prix, will incorporate two laps over a distance of approximately 16 kilometres. Four teams, with two drivers – one male, one female – completing a lap apiece in-car, will race head-to-head in each race over the two-day event.

“Qualifying takes place on day one to determine the top four runners who will progress through into Semi-Final 1 and the bottom four competitors who will go on to take part in Semi-Final 2: the unique ‘Crazy Race’.

“The Crazy Race will be a tooth-and-nail, all-or-nothing fight, with only the quickest team progressing into the Final, while the top three will make it through from Semi-Final 1. The winner of the Final – the fastest combination of team, drivers, car and engineers over the epic two-day battle – will then be crowned the X Prix Winner.”

The series’ teams will be accompanied as they travel around the world by environmental scientists who will study the effects of global changes on each location.

No X44 team drivers have been announced yet, but Hamilton will not drive.

“I am looking forward to building my team around sustainability and equality ” Lewis announced.

There will be some TV coverage with further details to be announced.

Find out more about the series from the Extreme E website