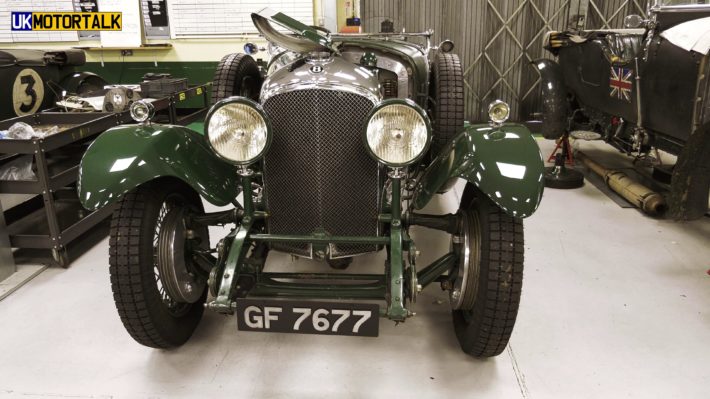 Since any day now we’ll be celebrating 101 years since Bentley Motors was founded by W. O. Bentley in Cricklewood, North London, we had a close look at William Medcalf Vintage Bentley to meet the team keeping many of the oldest of Bentley’s cars going strong.

As they enter their second century as a constructor of premium brand cars British car making legend Bentley continue to mine their illustrious heritage.

Founder and master engineer W.O. Bentley realised in 1919 that sales of his new cars would be hugely enhanced by motor sport success, the race cars looking very similar to the luxurious road cars, indeed often they were the same cars! This HALO effect is a highly lucrative link with a golden past as the brand moves onwards into the future, 2019 their best ever year selling over 100,000 luxury cars worldwide.

Ford have celebrated this motor sport link most recently as participants in the film Ford versus Ferrari a tense story based upon the 1960s bitter rivalry between two motor sport titans Bill Ford and Enzo Ferrari. Their setting, probably the world’s toughest race, the 24 hours of Le Mans.

It is no coincidence that many of the world’s greatest sporting car-makers built long lasting reputations in this marathon of marathons. Jaguar, Ferrari, Ford, Porsche, Alfa Romeo, and more recently Audi, Mercedes and Peugeot, all very long established car makers, many over a century creating motor sport history and all adhering to the adage “win on Sunday, sell on Monday”.

But, one era of Bentley success is frequently most admired by aficionados of motor sport. The Le Mans wins of the 1920s. The glory years of win after win. The Bentley Boys who took on the world as heroic almost mythic characters. If you like, the Spitfire pilots of their day. The death and glory boys who cut their teeth on the fearsome Brooklands banked circuit before going into battle with the might of Europe and America’s car giants. They were The Right Stuff of their day. The roll call of tough, capable, daring, fearless, drivers includes names like Duff, Barnato, Birkin and Benjafield, heroes all.

Perhaps disparagingly referred to as Lorries or Tractors by designers of more svelte European offerings, they were tough, powerful and could last the distance to take the wins. And so they did, just missing the podium at the inaugural 1923 race, winning in 1924 and again in 1927, 1928, 1929 and 1930.

Many of that era’s cars still exist, are worth millions and are usually in the hands of owners whose passion and fortunes allow them to still run the cars, to use them frequently and keep them often in a condition better than the were originally.

Keeping such cars running while respecting their age and preserving their originality requires an equally special breed of mechanics or more accurately engineers, men and women whose passion for these cars is matched by their skill, patience and desire to do everything they can to keep their charges authentic.

Our film’s subject, William Medcalf, is such a man, brought up with Bentleys, sensing their magic as a small child he realised as a young man he could easily devote his career to pre-1930 Bentleys, and, as he says, he progressed from a bag of spanners in a lock up garage and now heads one of the most authoritative teams of engineering geniuses in the world, and has himself become the UK’s leading authority on the cars of this era.

To walk around his hi-tech workshop is to enter a wonderland of 1920s Bentleys being refurbished, repaired, restored, prepared for long distance rallies and even period racing, the thundering giants of yesteryear proving that those Le Mans wins were not just about the drivers, mighty though they were, but were proof of 1st class automotive design and engineering. As they still are.