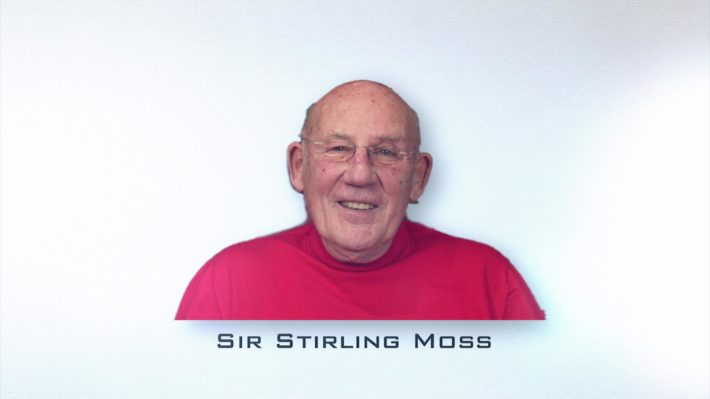 Yet, many years later, and a couple of decades of getting to know Sir Stirling personally, I was delighted to be invited into his home to record an extended conversation during which he reflected upon his long career.

Stirling’s home near Park Lane in London’s Mayfair was designed and mostly built by him on a bomb site he bought cheaply despite its prestigious location.

It has become a personal museum devoted to his life and career, full of, not just many many of the cups and trophies he won, but models, photographs, paintings, and the roof one of his early racing cars!

Much of our filming was in his office, a room again full of memories of his career, some good, some bad.

Curiously, there are only two signed photos on those walls… One of his former Mercedes team mate, five time world champion Juan Manuel Fangio. The other of a modern day legend, Lewis Hamilton.

Perhaps more bizarrely, the walls of his office are also adorned with three very bent steering wheels from three major racing accidents, the worst of them his near fatal Easter 1962 Goodwood crash. Aged 33, this incident resulted in a coma for a month, many months of rehabilitation, and effectively ended the F1 career which had seen him finish runner-up on four occasions.

Stirling tried a race car once more at Goodwood less than a year later. He decided, with brutal honesty, that he could never again be at the very top of his abilities. A decision which, with time to consider things more fully, he later came to regret.