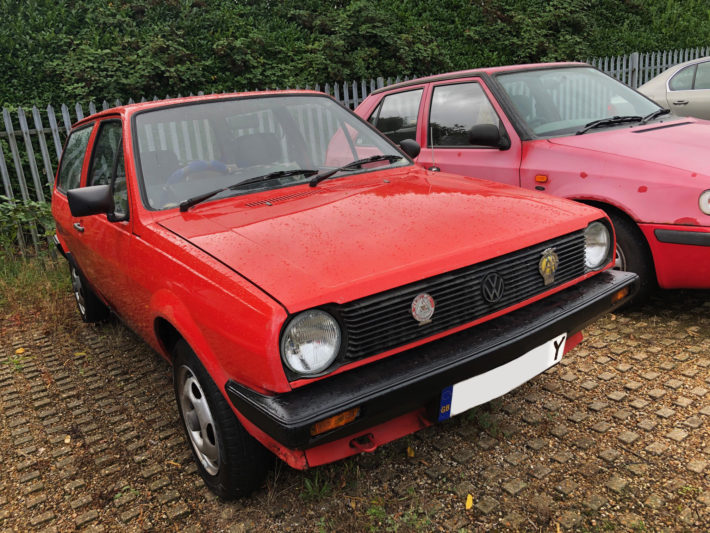 As mythological constructs go, the fabled ‘one lady owner’ second hand car has long been regarded with the same wariness as the existence of unicorns or an Alfasud composed of more than 50% original sheet steel.

Evoking memories of encounters between Arthur Daley and the many hapless dupes who wandered onto his South London forecourt to be greeted with its utterance, the phrase ‘one lady owner’  enjoys a somewhat tarnished reputation and is often accompanied by a wry raise of an eyebrow or a muttered ‘yeah, right..’.

But, ladies and gents I’m here to restore your faith in good honest second hand car sales and hereby present to you the Real Deal – an honest to goodness, in-all-its glory one lady owner, 1983 VW Polo.

First registered in June of that year, this Mars Red Polo C ‘Breadvan’ has been the pride and joy of the remarkable, 97-years-young Phyllis Reeves for the last 36 years and apart from her name on the all-important V5C the number of previous registered keepers stands at a big fat zilch.

Bought to replace a much-loved and cherished British racing green Mini Clubman estate, this Polo in its eye-catching, fire-engine paint job was Phyllis and her late husband Tom’s present to themselves upon a well-deserved retirement – as Phyllis says; “We’d never had a brand new car before, they’d always been second hand, so we thought ‘why not’?”.

Previously, as well as the aforementioned Clubman, Phyllis and her husband had owned and enjoyed a quite eclectic variety of wheeled transport, including a tandem and motorcycle-sidecar combination as well as a Jowett van – purchased in the late 50s for the princely sum of £21 – in which Phyllis took her driving test. She was later to go on to pass her Advanced test with the IAM in 1981 and rather regrets not having gone on to take the HGV test as she’d “rather have enjoyed the view from up there”.

Anyway, back in 1983, a nephew had previously acquired a couple of Polos as company cars from then local VW dealer Colbornes and using this previous custom managed to help his Aunt and Uncle secure a not inconsiderable discount of £338.75 when Phyllis and her husband decided they rather fancied one themselves.

This left the Reeves with a bill for £3825 (including £18.50 for a set of number plates) as recorded on the original invoice – which is still incidentally very much in Phyllis’ possession along with a whole sheaf of other paperwork amassed over her time with the car.

In the intervening 36 years the feisty little VW has amassed 142000 miles plying the length and breadth of the British Isles. Indeed, its first long-distance trip was a holiday spent in the far north of Scotland where it was greatly-admired by a holidaying couple from West Germany who were proud to see such a bright shiny example of German engineering making it so far from home.

More recently, the diminutive hatchback has stayed a little closer to home helping its owner maintain her independence by providing her with a lifeline as she runs local errands and visits friends and family in and around her hometown of Godalming in leafy Surrey.

A distinctive sight amongst the plethora of more modern and high-falutin’ machinery in this affluent corner of the Home Counties the bright red Polo is cared for by a friendly local garage who have always ensured that the car is well-maintained and safe for Phyllis to continue driving.

In and around the local area it regularly attracts admiring glances and over the years as it has moved ever further into affordable classic territory has attracted more than a couple of imploring notes begging its owner to sell left under windscreen wipers whilst parked in Sainsburys’ car park.

Up until recently, Phyllis has resisted the begging notes, but as she’s got older and the roads busier, the number of miles being covered has reduced to such a level that she feels it’s time to let her beloved little Volkswagen head off to a new home in the hope that a new owner will get as much fun and as many more years of dependable motoring from the feisty little car as did the original keeper.

And so, at the tender age of 97 – Phyllis has decided that she’s finally ready to hang up her keys and is looking forward to being ferried around by her family from now on.

And it’s very much Phyllis’ decision to stop driving for as far as she, her family, her doctor and the DVLA are concerned she’s still a safe and competent proposition on the roads.

“I’m glad I’m making the decision and it’s not someone else telling me to stop” she says.

An admirable and brave step taken by a remarkable lady and I personally feel she’s earned the right not to have to continue battling with traffic and road conditions which are a world away from those she’d encountered when she passed her test in that Jowett van all those years ago; especially as her little classic is unencumbered with even such basic driver aids as servo’d brakes and steering, let alone the multiple airbags and crumple zones fitted as standard on today’s small hatches.

A testament to the strong character of the lady who has looked after her little People’s Car all these years, and which arguably has done very much the same for her.