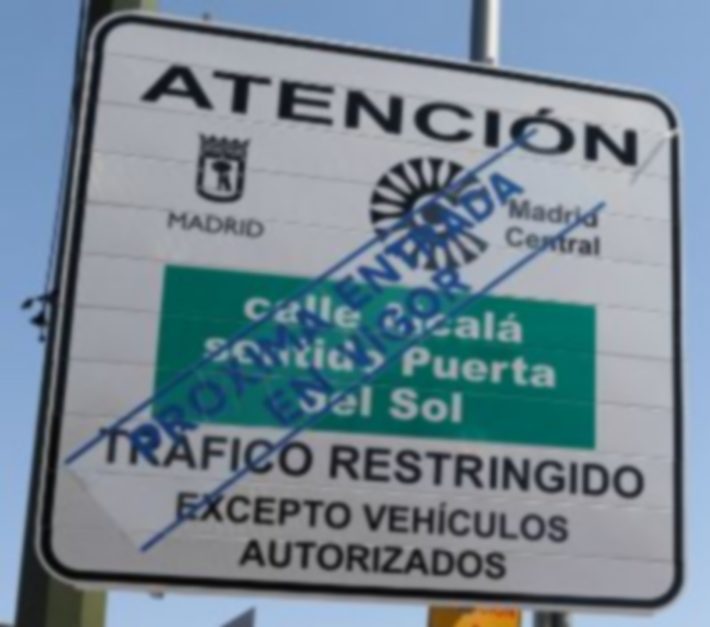 From our foreign correspondent – well not really, I I just always wanted to say that!

I happened to be in Madrid last week, and I do keep a bit of an eye on what’s going on in Spain, Madrid being my favourite holiday destination.

Madrid is a small city, smaller than London, but it has been as equally traffic choked and as fume ridden as our own capital.

I was interested to see how their latest traffic experiments were working out as they are similar to those recently carried out in Paris and being considered for large parts of London.

Essentially it’s all about removing polluting traffic from the centre of the city by keeping it further out and only allowing the least polluting cars into the centre, and then only on a limited number of roads, the rest being pedestrianised.

So is it effective?

‘Yes’ and ‘No’ is, I think, the answer, and the same will probably be true when similar plans are adopted in London.

Those streets within the controlled zone, about 2 miles square, are indeed much less busy with traffic. It is safer to cross the roads. They even smell cleaner and you don’t get that gritty taste in your mouth as you do in central London.

But, the traffic hasn’t reduced much overall, it’s just been moved a bit further out of the centre. Streets that were once relatively free flowing are now themselves traffic choked and as hazardous and polluted as the inner city roads once were.

The controls are simple and appear quite effective.

All vehicles permitted to enter the controlled area are re-registered with a blue rear number plate and are, almost without exception, hybrids and electric cars. (The few exceptions being some emergency vehicles, but even the police cars are nearly all hybrids and most ambulances are going that way.)

Unlike the smelly diesel buses of old London streets, many of the buses in Madrid are now hybrids, and the centre area is served by small electric buses. In fact, Madrid’s bus fleet is likely to be all hybrid/electric by 2020, they say.

The restrictions have persuaded almost all taxis to switch to hybrids and have spurred an incredibly rapid take up of all electric cars, small city cars being especially popular, notably the electric Smart car and a variety of small French city cars like the Ligier.

So what of electric cars in this country? Well, sales are at last picking up despite the removal of the government subsidy that kick-started the changes.

The latest SMMT figures suggest sales are still increasing, albeit slowly. Some of the older electric and hybrid cars are now reaching the used car market and being eagerly adopted as, even with health residual values, they are simply much more affordable than the brand new versions.

At the simplest level of economics, until an electric or hybrid car is as cheap to buy as its petrol or diesel equivalent the take up will remain relatively small, still rather less than 10% of the total UK car market. But, as infrastructure changes, and manufacturing costs are evened out, I can’t imagine that it will be very long before we see electric or hybrid as the first choice for every new car buyer.