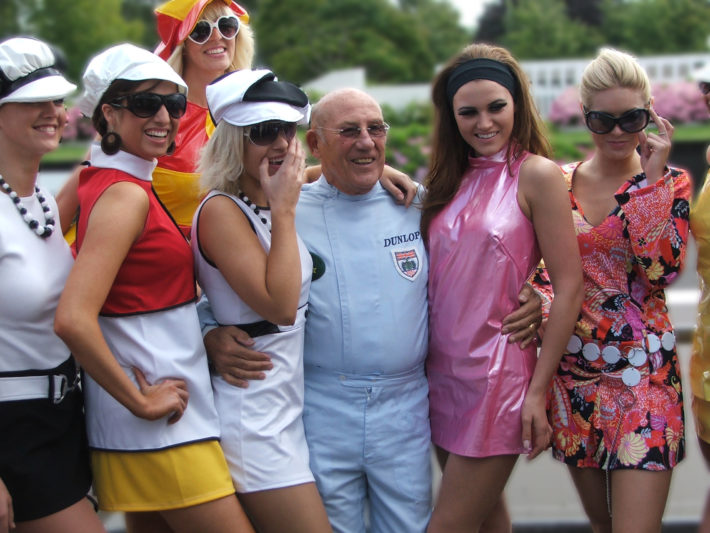 … or so I asserted in my birthday card wishing Sir Stirling Moss a Happy 90th Birthday today.

Sadly, Stirling is now in poor health, and may not be able to read my comments personally, but I am hopeful his ever loyal wife Susie will do so and perhaps read them to him.

I have had a lifelong fascination with Stirling’s amazing motor sport career. I became fascinated when I saw him win a race in the Vanwall in 1957. I was just 6 years old, a very impressionable age.

I think it was a grainy black and white blurred image of a man, battling against other supermen, in an amazing teardrop shaped car that I didn’t even realise till later was British Racing Green.

Very many years later I saw a colour photo of that very event… It’s on the downstairs loo door in Stirling’s house, and I was there with colleagues from UKMT to record some film for Stirling for his own website.

I have been incredibly lucky to meet many of my boyhood heroes, many of them through the Goodwood events, in the last 30 plus years, and to have spent a lot of time both officially “interviewing”, and then just chatting with Stirling, whom I consider a friend.

In that, I share the fascination with the Duke of Richmond, a man of similar age to me, and like me a motor sport addict from a very young age.

The Duke speaks with considerable warmth of his affection for Stirling, and of the great importance of Stirling to the Goodwood motor sport events. The then Lord March, now the Duke of Richmond, restarted racing at Goodwood as his grandfather did before him post-WW2, and Stirling’s illustrious career is truly bound up with Goodwood.

The Duke of Richmond at Goodwood Revival 2019

His single seat racing career began there with a first win in F3, the then F1 feeder formula, in 1948 and, oh so nearly ended there at the headline Easter meeting in 1962, as, for reasons still unclear, his car barrelled at undiminished speed into an unyielding earth bank near St Mary’s corner.

They say Stirling was cut out of the car, but I’ve seen the pictures in Stirling’s own extensive archives, and the car was cut to pieces from around him with hacksaws, hammers, spanners and bolt croppers as they desperately tried to keep him alive.

After many weeks in a coma, Stirling pulled through, and a year or so later tried out a single-seater, again at Goodwood.

He elected to retire on that day. He said he couldn’t drive as quickly, as sharply, as instinctively as he had done before, so it was time to retire. He later said that he regretted that decision, wondering that if had he waited another year might he have been back to his extraordinary capabilities once more?

In an era when drivers drove whatever they were asked – and paid – to drive, saloons, sports cars, single-seaters, Stirling dominated in all types. Runner-up in F1 championships 4 times, world sportscar champion, etc, etc, his success rate was striking. Hundreds of races won across the globe, and, until Lewis came along, probably the most successful racing driver this country ever had.

When racing restarted at Goodwood in 1998, one of my strongest memories of that first Revival was watching Stirling – competing – charging into Madgewick with all of the old fire and vigour – 50 years after his first win there!!