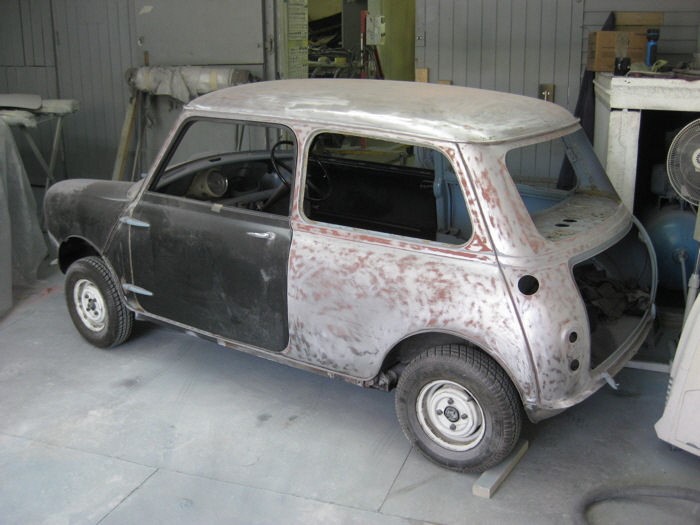 Further and more laughable shenanigans between the build: –

It sounded like a million-dollar car to me. It was summer, at the traffic lights, a gorgeous E-Type Convertible Jag pulled alongside me, a suited and booted executive at the wheel and an equally gorgeous blonde lady in the passenger seat.

She just could not look over at me of course in my RAC race prepared Mini, so I just had to get her attention.

A few repeated blasts on the throttle pedal soon brought her eyes in my direction with the deafening sounds of my silencer-less straight-through 8-inch exhaust system. She did not say anything, she did not have to as her face said it all as she collapsed into floods of tears and laughter.

But, fear not unbelievers, when those lights changed to green all 30 horses of that little 800cc Austin A series engine with its Janspeed LCB and Holley carb were unleashed with wheels spinning and smoking trails of rubber as the E-Type disappeared in my tyre smoke.

Well that’s what I believed, re-told, and maybe somewhat elaborated over the years!

I think the deafening sound was more of a deterrent than a speed trail challenge. It was not as though I had any chance of winning a speed trail race against the E-Type Jag anyway.

Final bit of shenanigans between the build: –

Back to moving the old Mini with the hole in the floor around the side of the house….

“Give us a hand darling to shift this old Mini around the side of the house? Now all you need to do honey is pull on that jack handle and swing to the left as I push/pull the car into that slot.”

This, of course, is easy with a colleague at work who has done it before, and knows what to do and when.

However, yes, you guessed right again, the car fell off the jack onto Ann’s knee as she cranked the handle in the opposite and wrong direction to where we had to go.

Having checked she was ok, I took her into the kitchen to make a cup of tea. She’s tired after a long day at work, and an arduous wet start to the day, and hence decides to have a relaxing hot bath. Like most women, Ann likes a hot bath, and I mean mega hot.

In the meantime I continue moving the old hole in the floor Mini around the side of the house when I hear a scream from the bathroom. Luckily the window was open and opposite the drive where I was working.

The heat from the bath water had caused the bruised knee to swell up and seize her leg/knee movement.

Newlywed and adventurous, it was quite a new experience for me to lift my new wife out of the bath, dry her and dress her for casualty. Naturally and being a bloke, I find any old pair of knickers from the draw to which she says “No, not them! The other ones if I am going to casualty!”

My second, or is it the third, major error of that day, I thought newly weds were supposed to be blissfully happy. We were of course and still cry with laughter when we reminisce these days.

The build detail and final body to build on: –

The plan was simple… Find a Mini with a sound body. Simple maybe, but almost impossible with all the weaknesses of the Mini body and the inferior steels, paint, and materials used in those days. It was a mighty task.

The solution as always was staring me in face.

One of the security guys on the gate at work had owned a Mini from new that his daughter was now driving. It was a 1959 MK 1 Austin Seven. (Yes, when BMC launched this car in 1959, the Austin branded version was named “Austin Seven”, alongside the “Morris Mini-Minor”, shortened to just Mini.)

This was the best deal to date. The car, in this guy’s view, had reached the end of its life, it would not start or run and was too expensive to repair, even on mate’s rates. So, he paid me £5 to tow it away!

Four valves had burnt out, so, remember the rules, if it has Tax and MOT drive it until it expires, but do not spend more than £5 to get it running. I now had an extra £5 in my pocket!

A spare head from one of the many donor cars and half of an old head gasket kit later had this baby back on the road in less than half a day.

The next key element to the plan was to build the car based on the Mini Copper Spec, i.e. a 1275 engine with a steel crank, Mini Cooper front hubs, discs, calipers, drive shafts, twin Cooper fuel tanks, oil cooler, Mini-lite Ali wheels and Spax adjustable shocks. All this was going on in the background whilst the body was being repaired in the fabrication shop at college by some welding student buddies of mine. It cost me nothing, apart from my time, to fit a few new clutch and cylinder head overhaul jobs for the tutors running the welding department.

Front and rear sub-frames had been stripped to bare frames, strengthened in the fabrication shop at college and black stove enamelled painted by the paint techies at college. They were re-built with all new components as I could not take any chances with donor bits with the advent of 125 bhp going through them.

A new set of Spax adjustable shocks were fitted front and rear and the solid rubber cone suspension trumpets were modified as per David Vizard‘s (remember “How to Modify your Mini” by David Vizard) instructions to keep her as low as possible to the ground without the drive shafts knocking on the front sub-frame.

Mini Cooper overhauled discs, hubs, calipers and shafts where hung on the front sub-frame. The brakes were also modified following David Vizard‘s instructions to give two lines front and rear with a manual adjustment valve on the dash so that I could manually alter brake bias front to rear. A brake servo was also fitted to increase brake pressure and to slow down my 125 bhp worth of horses when they were unleashed.

The project is slowly but surely progressing.

The body stripped to bare metal and sand blasted, it has many new factory panels welded in, front and rear floor panels and front wings, the two weakest areas of the Mini. The rear sub frame mounting points have also had new panels welded in and strengthened. Other weak areas of the body are also reinforced, particularly the front door mounting points which were known areas of concern.

The welding students also built me a beautifully engineered roll cage to full “RAC” spec of that time, but circumstances transpired against me and sadly it was never fitted.