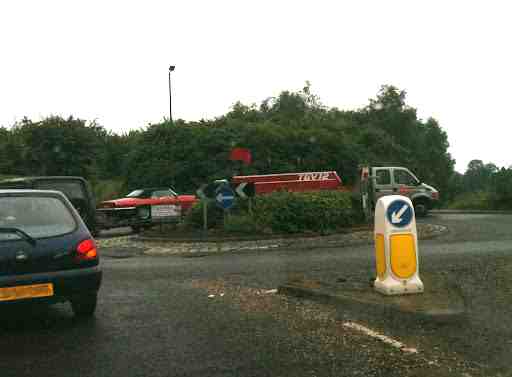 If you caught the most recent episode of The Nation’s Favourite Motoring Programme, you’ll have seen Clarkson, Hammond & May attempt to re-write the rules of rail travel with their own..unique approach to public transport.

Richard & James’ approach was to string together a collection of caravans (what else?) as a bijou set of carriages towed behind an ageing Audi S8 ‘loco’ shod with rail wheels.

Jeremy on the other hand – and somewhat predictably – set off down the high-speed route by hitching a cutdown caravan body to a V12-engined Jaaaag XJS and treating Rail Express’ Editor Murray Brown to a rail journey he’s probably unlikely to forget in a hurry in the somewhat-optimistically named TGV12, the poor sod..

Anyway, we’re based not a million miles away from the Top Gear track & occasionally we’ll spot cars from the show being filmed around the locale or the production crew enjoying lunch in one of the awfully pleasant local boozers near Dunsfold, Surrey; and this morning, as we blearily trundled through the village of Compton on the way to the A3, we found ourselves behind a low-loader sporting a rather familiar red XJS convertible & a somewhat-modified & equally red caravan..

With a big spoiler on the back..

Whilst we’ll never make the ranks of Hans Lehmann & his prototype-bagging cohorts we did manage to grab this snap as the latest addition to the TG range of glorious failures headed off to parts unknown, although judging from the direction it was heading it could be on its way to the Top Gear exhibition at Beaulieu, so keep your eyes peeled if you’re planning a visit to the excellent National Motor Museum during the Summer holidays.

If you’re in the UK (or can spoof IP addresses), you can still catch the latest edition of Top Gear on the BBC’s iPlayer until the weekend, but be warned, it’ll probably put you off rail travel for the foreseeable future..