Between bouts of highly-skilled automotive lunacy at the recent Ford Fair event, Paul Swift took time to chat with UKMotorTalk’s Alex Wakefield about his career and following in the footsteps of his dad, Russ.

Whilst he took a well-earned break from entertaining the assembled Ford devotees, UKMT were able to catch up with Paul Swift, stunt driver without equal in a more relaxed atmosphere to the one he is used to – the Ford Press Centre. 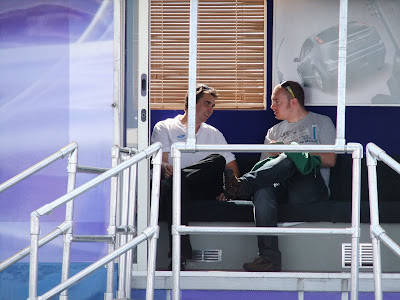 Paul told us how he had become involved in motorsports and stunt driving. His father, Russ (a regular sight on British TV over the past couple of decades) was interested in rallying and Autotest and as a result, Paul grew up emulating him.

“I started aged seven on a garden lawnmower” says Paul, and it wasn’t long before he moved into full size cars.
“By sixteen, I was competing competitively in Autotest in the Durham area in a classic Mini…and I won the championship in my second year of competition.”

Paul won the BTRDA British Championship for the first time in 1998 and won the national title seven times in total, making a reputation that has now earned him a place as the nation’s foremost precision driver.
After retiring from competitive motor sport, Paul embarked upon his new career path. He can be seen doing what he does best around not just the UK but the whole world at live events for clients such as Ford.

You may also have seen him at Top Gear Live, wowing motoring fans by the thousands at enormous venues on every continent. At Ford Fair however, he was restricted to a 60 metre long arena. Paul confesses he prefers the more intimate venues.

“At the bigger displays, there is a void between the car and the crowd. Here, people can get much closer to the action – it’s more exciting!”

It certainly is that – we watched as Paul flung around a Ford Fiesta, Focus RS and Kuga diesel with equal aplomb.
“The smaller cars are more nimble” Paul admits “but the Focus RS is by far the best car I’ve ever driven.” 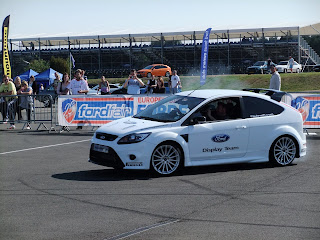 Paul is lucky enough to have one of these rally bred beasts as his daily driver although will own up to the fact that his wife prefers the charms of the Kuga – particularly with a new baby on the way.

As Paul signs another autograph in the Press Centre, he tells us about his passion – The Paul Swift Precision Driving Experience. This gives those previously able only to admire Paul’s skills from the sidelines the opportunity to experience his skills first-hand from the passenger and driver’s seat. Paul himself can be available to give direct tuition to everyone from young drivers to corporate clients, coaching in roadcraft or the experience of driving on two wheels as required.. 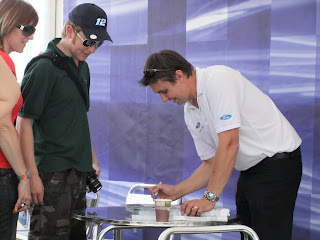 The short time we have with Paul indeed passed very Swiftly.
Despite being able to demonstrate his often alarming skills in a haze of noise and smoke, he is a charming, relaxed and confident character – a behaviour exhibited both in and out of the car. We look forward to having an opportunity to enjoy his company and talent again some time in the not too distant future.
You can watch Paul Swift in Action yourself and find out about his driving experiences at: