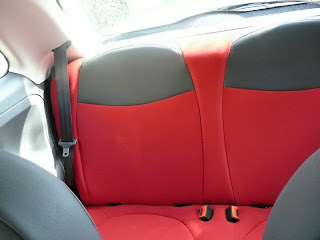 What colour outside? White. The only free colour. And the colour that works best. Everyone else seems to agree, literally every other one I see is finished in this colour. The car was ordered 14th February and duly Christened Valentino. I’ve never named a car before. I don’t think I have ever admitted in public that I have now done so either. 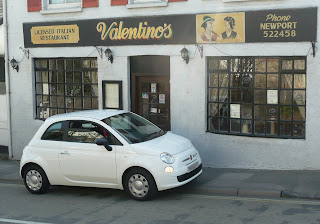 Valentino was delivered the day after my 30th birthday and we celebrated together with a tour of the South coast – Portsmouth and the Isle of Wight. Everywhere we went, the road ahead was scanned for other 500’s. Every one we spotted was flashed and (nearly) everyone waved back. This is a game I play over 6 months later and I never tire of it. It seems the 500 makes people smile. A Spring outing to the AutoItalia festival at Brooklands brought an enormous amount of pleasure with Valentino being parked with dozens of other cars, driving through the crowd thronged event on a beautiful sunny day sandwiched between Ferraris and Lamborghinis is something I will never forget. 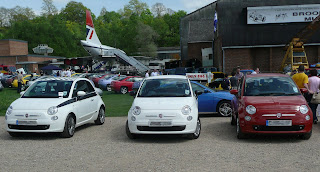 The funny thing was that this modern interpretation of the original 500, a car which has a passionate following, was never questioned. Many an Issignonis Mini can be spotted wearing a ‘100% BMW FREE’ sticker. I’ve never heard nor seen any unpleasant comment from the original 500 brigade, despite the new one’s engine being in the wrong place, Beetle style. In fact, at Brooklands, new and old were parked up together like boys and girls at a primary school barn dance, only voluntarily.
The new 500 is a marvel. It’s £3000 less than the cheapest MINI. It’s smaller, yet has more space inside. It’s cleaner, more accessible and isn’t identified with hateful estate agents. OK, it’s not perfect – the ride is a little bouncy, the steering has no feel to speak of and some of the components feel a bit cheap but the return on the investment is staggering. And confidence must be high – BSM recently agreed to replace their entire Vauxhall fleet with the little FIAT and this can only be a good thing for residuals, with demand for used examples surely being pushed up by new drivers with wealthy parents looking to buy their offspring something they feel comfortable in. I’ve only seen girls learning in them though, which makes me wonder – how come I never feel at all…. metrosexual driving this car? How come I see so many blokes driving them and how come so many blokes seem to be driving powder blue examples? This is something I can never explain, although I did note that every original 500 I see is being piloted by a man, generally with a large beard.
Alexander Henry