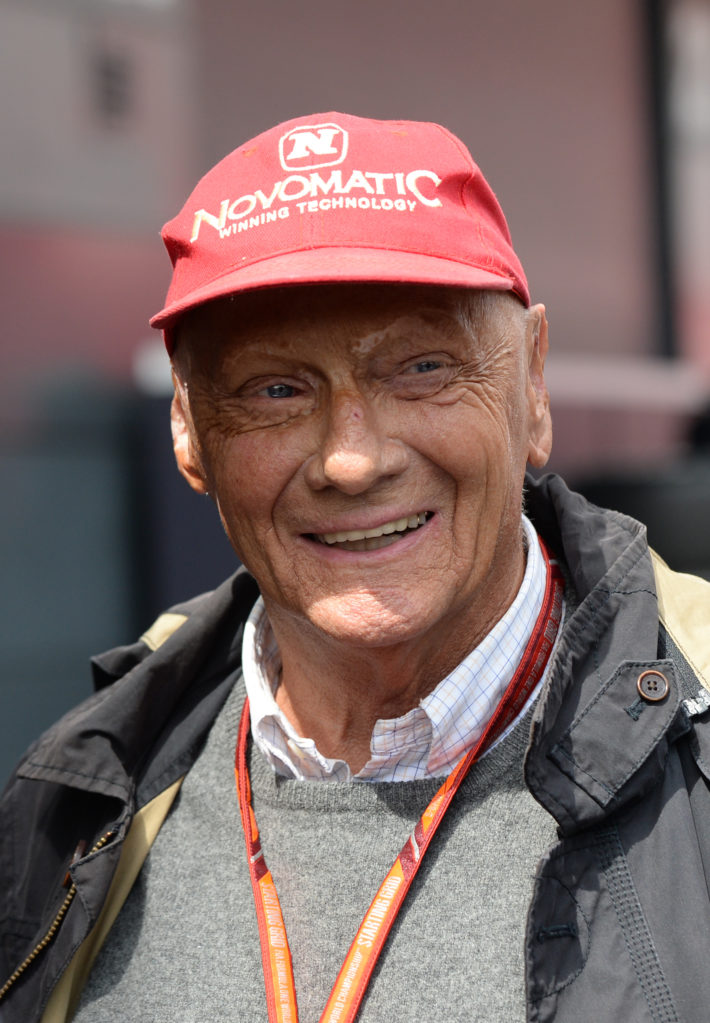 When one hears the name Niki Lauda, inevitably – for this writer at least – it’s accompanied by images of a slightly-built man with a rodent-like overbite and a permanently-affixed, Parmalat-emblazoned baseball cap worn to conceal scars from an infamous and horrific crash sustained back in the days when death or serious injury was still considered something of an occupational hazard.

This was Niki Lauda – a man who by rights could arguably lay claim to the title ‘Survivor’ & usually of late to be seen offering pithy professional insight to any number of TV stations on GP weekends or perhaps gazing intently at the Mercedes team’s timing screens where in addition to his role as a non-executive director he held a 10% stake in the business.

Ever the shrewd player both on track and off, Lauda managed to succeed in his chosen profession(s) perhaps despite rather than because of circumstance – his wealthy family practically disowning him as he embarked on a motor racing career, resulting in him having to fund his early forays into the sport through bank loans and incurring personal debts which were only cleared when Enzo Ferrari – recognising Lauda’s natural and unmistakable flair – signed him from the ailing BRM team in 1974.

It was at the wheel of one of Enzo’s creations two years later that Niki was to suffer the terrible injuries which would make him such a instantly-recognisable personality and a household name well beyond the world of Formula 1 motor racing.

At a race in which he was vehemently opposed to taking part, due to – as it transpired – well-founded concerns over safety, his Ferrari 312T2 speared off the infamous Nurburgring circuit and was rapidly enveloped in flames. Lauda was trapped in the wreckage and before he could be extracted suffered vicious burns to his head and face in addition to damaged lungs caused by the inhalation of toxic fumes generated by the conflagration.

Many expected this to be not just the end of Lauda’s career but also his life as he collapsed into a coma and was rushed to hospital from where he was not expected to return, but in what has come to be regarded as one of the most remarkable recoveries from catastrophic injury of its kind, he defied the odds and, heavily-bandaged, was back in the cockpit of what might well have been his coffin only six weeks previously to contest the Italian Grand Prix in Monza – taking a creditable fourth place in a race nobody expected him to be alive to see, let alone compete in.

Whilst he had been away recuperating and in particular undergoing surgery to rebuild his eyelids, Lauda’s rival and off-track friend, the laconic James Hunt had been making inroads into Niki’s championship lead and by the time the final race of the season at Suzuka in Japan rolled around, the Austrian’s lead over Englishman Hunt stood at a paltry three points and with all to play for it seemed that this quite astonishing season was set for a showstopping finale.

However, whilst there was a a certain degree of drama in how the final standings were decided, fate was in the hands of Hunt and his fightback from a late pitstop rather than in those of his Ferrari-driving rival, as Lauda was to retire – perhaps understandably – after two sodden, and to his mind – lethal – laps leaving the Briton to win by a single point in his Mclaren – a feat which is portrayed so evocatively in the culmination of Ron Howard’s stunning film Rush.

For his part, Lauda – whilst disappointed to have lost the championship – felt equally blessed to have been afforded the opportunity to even compete again and was to regroup, biding his time and ultimately winning his third and final world championship at the wheel of a Mclaren some nine years later, when, in 1984 he beat his highly-regarded team mate Alain Prost by an even slimmer margin than by which Hunt had bested him in 1975 – just half a point – to take the title in Portugal.

Lauda finally retired from Formula 1 the following year with 1985 being a frustrating and difficult season and one which saw the Austrian only completing 3 of the races he started – his final F1 race being the new-to-the-calendar Australian Grand Prix in Adelaide.

But whilst he’d finally walked away from the driver’s seat, Niki Lauda certainly wasn’t destined to put his feet up as he threw himself back into the running of his airline businesses as well as acting as a consultant and mentor to a number of F1 teams including Ferrari, the ill-fated Jaguar and most recently Mercedes where he was instrumental in bringing onboard the multi-title winning sensation Lewis Hamilton for the 2013 season.

He also acted as a consultant and colour commentator for a number of broadcasters – most noticeably Germany’s RTL – where he could be a controversial yet never dull voice of information and opinion..

Sadly prey to ill-health in his last couple of years, Niki Lauda passed away yesterday (May 20th 2019) at the age of 70 following kidney problems but even though we mourn the fact that he has left the stage at what these days is a relatively young age, I think we must still be remarkably grateful that he was able to continue treading its boards at all.

Coming back as he did so decisively and in more than a degree of pain – both mental and physical – from a disastrous accident, widely-expected to be fatal at worst and career-ending at best, took reserves of courage and determination that can’t fail to be admired by motorsports fans and the wider world alike and he will be deeply missed by us all.

Formula 1 and motor racing in general has lost a true legend, an icon and yes, a survivor.

The epithet “legendary” is often overused, and commonly so in motor racing, but Niki Lauda truly deserved the title. A legend as a driver with 3 world championships to his name. A legend as a battler fighting injuries right til the bitter end. And a legend as a talent spotter developing the likes of Lewis Hamilton and Nico Rosberg into world class drivers with 6 championships to their names.

Niki won his 3 titles despite the horrific injuries received in the German Grand Prix in 1976 when his car crashed into a bank trapping him inside a raging inferno for what seemed an eternity.

Rushed to hospital few thought he would survive his injuries, extensive 3rd degree burns and inhaling toxic smoke, the last rites were observed but he later observed “if the brain is still alive it will force the body to live on”.

Yet, within 40 days he was back racing, still bandaged and wearing a larger helmet to accommodate his facial burn dressings. He was the first to admit his injuries didn’t improve his looks!

Leading the 1976 championship in a points battle with James Hunt, he knew when to get out of the car when it was simply too dangerous to carry on and in torrential rain at Suzuka he pulled into the pits and quit the race, thereby gifting that year’s title to Hunt, and effectively ending his Ferrari career. Getting out of a leading car didn’t sit well with Enzo.

2 more titles followed, the last of them for McLaren, before Niki “retired” at last from racing, but he went on to gain a commercial pilot’s license before founding his own airline, Lauda air.

However, he never really left motor sport. Niki was not the hothead all go and no think as so many of his contemporaries were.

He was a thinker, an analyst, and a planner, and his experience was much in demand by Formula One teams which led him eventually to be instrumental in the resurgence of the Mercedes F1 team. He became Chairman with his friend Toto Woolf as MD, both taking a substantial shareholding. The team have so far garnered 5 driver and 5 constructor titles with surely more to come.

Ultimately those 1976 injuries were to take his life 43 years later. He had a double lung transplant only last year and both kidneys had already been replaced in recent years.

Since being hospitalised with flu and chest problems a few months ago, Niki never regained full health and passed away quietly on Monday at just 70 years old, a great loss to family and friends.

A legend lost… but never forgotten.