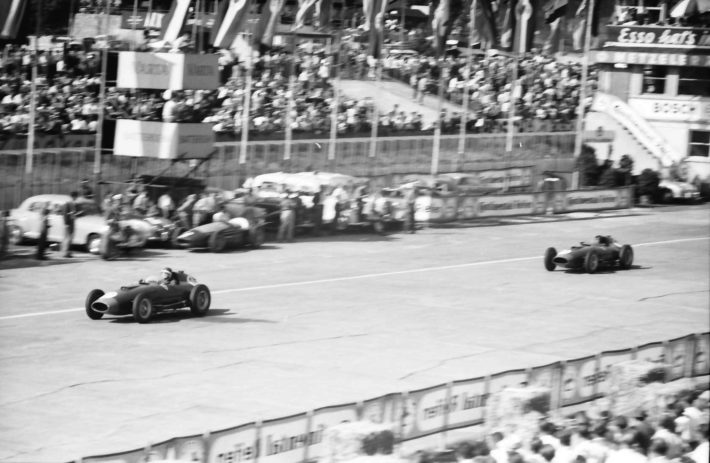 The current era of Grand Prix racing – the Formula 1 years – dates from the creation of the first FIA World Championship in 1950. In the early years the championships for both drivers and constructors were largely dominated by European drivers and teams but, through the mid-fifties, British teams and drivers began to emerge and feature in races all over the globe.

Names like Stirling Moss, Tony Brooks and Peter Collins, and, finally in 1958, Britain had its very own and very first Formula One World Champion in Farnham’s Mike Hawthorn.

Sadly, like Nico Rosberg decades later, Hawthorn almost immediately, and to great surprise, announced he was to retire from the sport, a sport that had killed 5 drivers in that season, among them both of Hawthorn’s Ferrari team mates Peter Collins and Luigi Musso.

But he was not to enjoy his retirement or the fruits of his hard won World Championship. Just weeks later, and just a few miles from his home, the legendary Mike Hawthorn was killed in a road traffic accident when his Jaguar saloon left the road and hit a tree. An accident that remains unexplained to this day. He was just 30 years old.

In an era when many drivers lost their lives racing each season Stirling Moss commented he saw most of his fellow drivers every month at funerals!

Ironic then that one of  the finest and fastest drivers of his generation should lose his life on the road.

Well liked in the sport, and remembered as a warm and generous man, he was always immaculately dressed. He even wore a bow tie in the cockpit which became his sartorial trademark.

That championship winning 1958 season was an extraordinary one. Mike only actually won 1 race – the French Grand Prix on the old Rheims circuit, a race he had also won in 1953 when, as a rising star, he beat the legendary Fangio – but by dint of consistency, coming second in 5 of the others, he and Stirling Moss went into the Moroccan Grand Prix separated by the slimmest of margins.

In an extraordinary incident the race organisers attempted to disqualify Hawthorn for physically pushing his car, but friend and rival Moss spoke in his defence to the race officials, a stand which was to give Hawthorn the title and relegate Moss himself to that year’s runner up spot.

Years later I asked Stirling if he regretted his robust defence of his friend… “Never for a moment” was his reply.