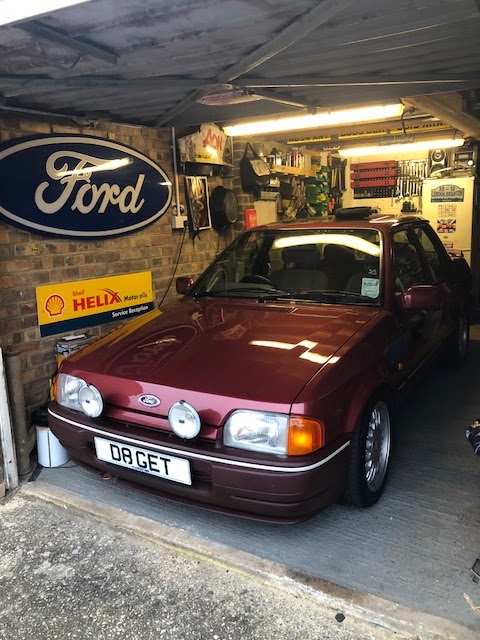 I’ve got a theory that the cars you like, the ones that give you that sense of nostalgia; are the ones that were kicking around when you first got into cars.

For me, it’s been pretty much a life long obsession, starting just before I could talk and picking up steam from the age of 2-and-a-bit.

That was the late 80s, cars were boxy, music came on cassette, velour was in and everything was plush. I’ve many memories of riding around in my parent’s car, mix tape on, watching everything going past out of the window. That car was a Ford Orion, so it seems everyone’s Dad had one, or their Grandad, Uncle, mate or whatever. Ours was an ‘Equipe’ [Eekwip – in case you were wondering] metallic red with an RS spoiler, alloys and to my child mind was the plums.

We kept it a fair while too; from brand new until it was about five, maybe six years old. I was absolutely devastated when they sold it, to be replaced by a Mondeo in the mid-nineties.

I’m in my early 30s now and no less car-obsessed, though the novelty of daily driving the older cars has near-enough worn off (though there are still those sunny days when there’s no better way to get to work); modern motors have long since taken over as daily drivers.

I’ve always had a fondness for retro though, E30 BMWs, 190E Mercs, even the behemoth Volvos have a certain appeal, and when it comes to pitching up at a car show with Retro stuff I’m given the fizz.

I’m lucky enough to have a garage tucked up at the bottom of my garden and inside is my own little slice of retro. I’ve arrived here through a series of other cars, but there’s one that will never leave my little collection. Yep you guessed it, another Orion, a nostalgia trip that will undoubtedly get Freud-enthusiast tongues wagging.

Now, I’m not here to hark on about what a great car it is or was. There are better, trust me, but it tickles my pickle and that’s all that matters; different strokes for different folks and all that, after all, it could be worse, at least I’m not infatuated with a Citroen Sea-three barnacle or whatever that plastic encrusted monstrosity is… Okay, Okay, I know I’m getting off the point here and that’s probably no surprise to you by now, the fact is that I do get to go a number of ‘one-make’ shows but there’s something to be said for mixing it up a bit which is why when my good friend told me we needed to come up to a show in Bury St Edmunds, I loaded up the car and headed off.

The drive up wasn’t quite as-planned… With the help of friends I built and fitted the engine in my ‘Onion’ seven years ago. It’s been warmed up, cooled down and ‘used’ but incredibly it’s worked well… until now. A bizarre habit of randomly stalling when rolling to a stop. Fine, it restarted every time until I reached Essex at which point it decided that re-starting was far too much bother and an un-scheduled rest break ensued.

I’m always astounded by the public, and I wasn’t let down this time either; total idiots pulling in front and stopping dead whilst I was trying to bump start the car…

On the other hand, a kind chap and his wife in a tidy Mk3 Golf helped push me out of trouble until we were ready to go again. A full evening of fixing numerous faults on Mark and Amy’s drive (sorry neighbours) and we were back in business.

And now we get to the point…

Cars on the Green has something for everyone! Assuming you are in some way in to cars, ‘normal’ in other words. It doesn’t matter what you’ve grown up with either; the chances are that if you were born after 1919, there will be something there for you.

There was definitely A LOT there for me, not all my usual flavour, check out this Beetle for example, a Karman Convertible Beetle, imported from California, restored and all the better for its 50bhp engine. 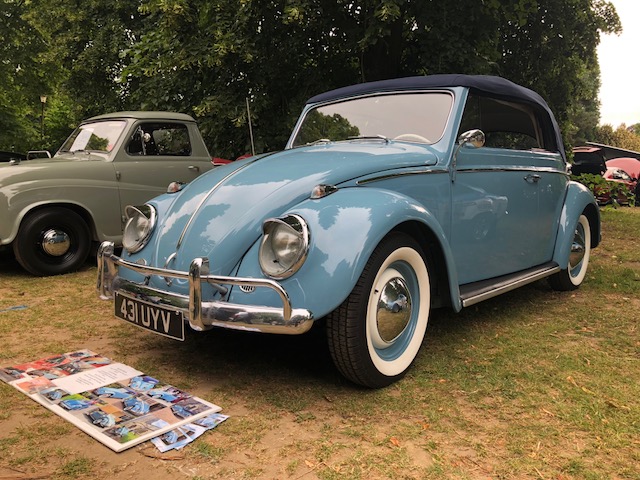 Or a selection of rat-look Hot Rods dumped on air and bristling with shiny V8s. 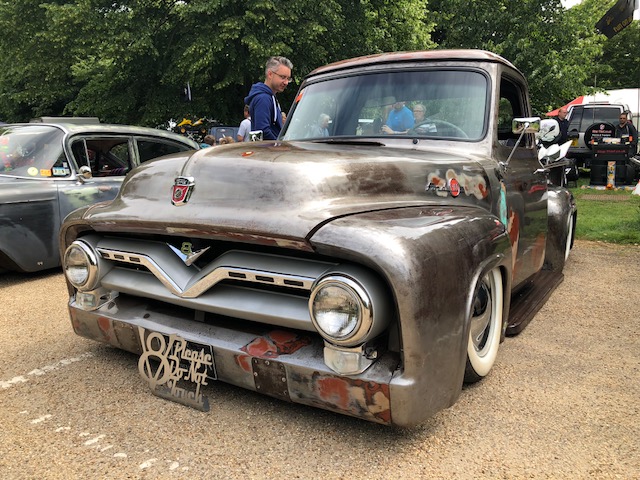 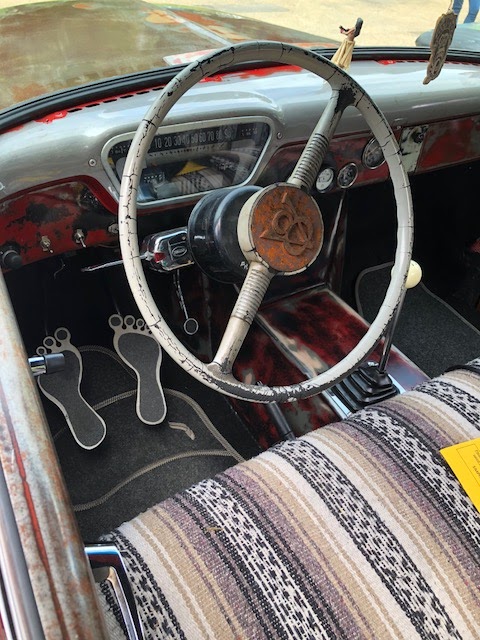 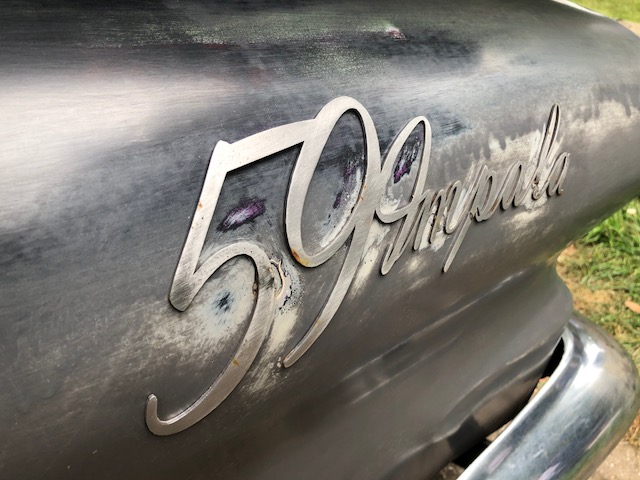 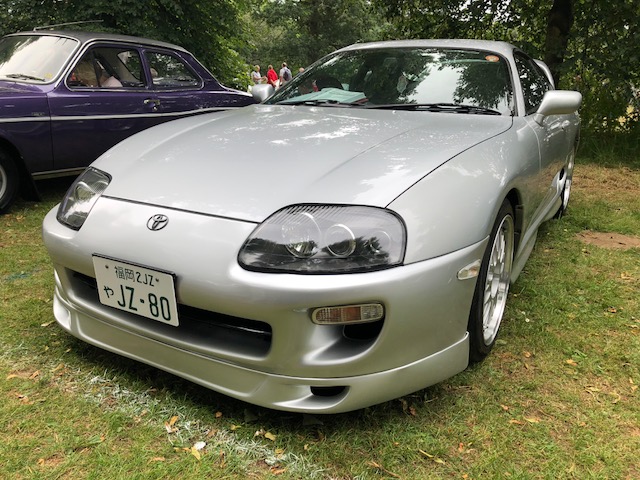 Or a cute little piece of Italiana (Dave, this one for you) in the form of Fiat’s pretty X19. 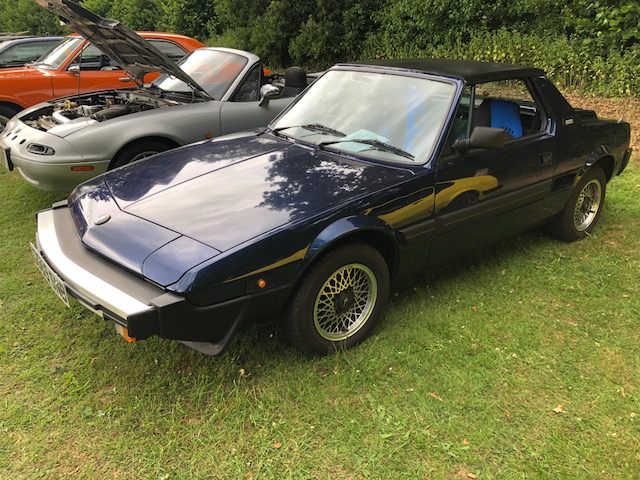 Have I made my point?

For me though, the car of the show was a Mini. This one was more than a bit special; you could see in the owner’s eyes that this was more than a car, but it is part of him and part of his late wife and the adventures they shared together. “The look your wife gives you, is the one mine gave me” he said, laughing as he put his hand on my wife’s shoulder as we chatted over the car. 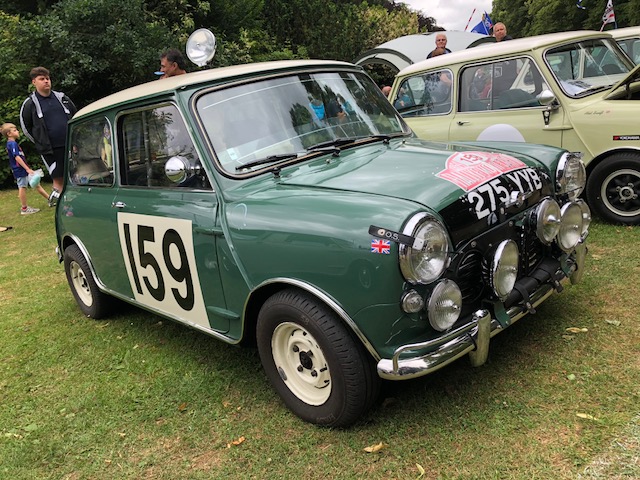 The car is a genuine 60s Works rally Morris Mini Cooper S competing in the 1964 Rallye Monte Carlo, before being sold on – as a racer where it was stripped – then on again to its current owner; whom by pure one-in-a-million chance, happened upon the previous owner and the original timing gear and a chunk of history.

This isn’t a concourse, cotton-wool covered show piece, it’s driven as often as he can. Event stickers and scrutineering tags fill the interior, a self-contained mobile museum dedicated to itself. It’s honest, it’s filled to the brim (none of this weight saving cobblers) and more than anything it’s built. Really built. 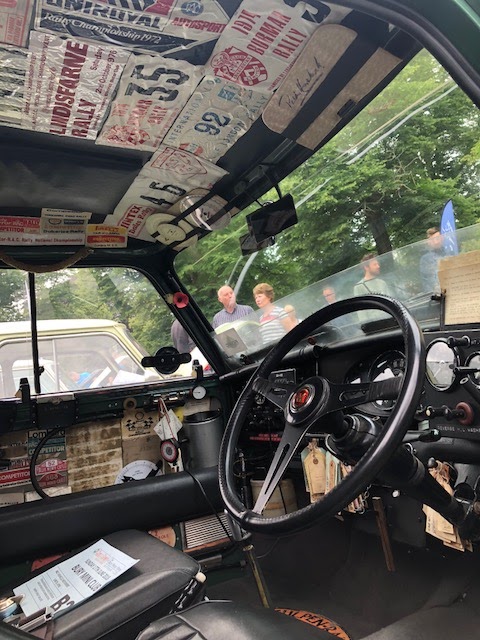 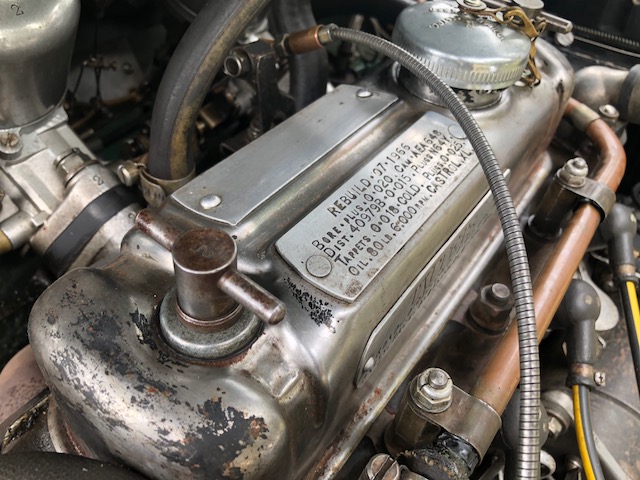 There was so much to love, the original engine still sits in the car with its straight cut box, rebuilt properly in 1966, aeronautical style and with only routine servicing has clocked the best part of a quarter of a million miles. The best bit though? A twin bottle holder. What for? “Well, that was to take a couple of bottles of Whiskey. The Rally did last for several days, you know.” 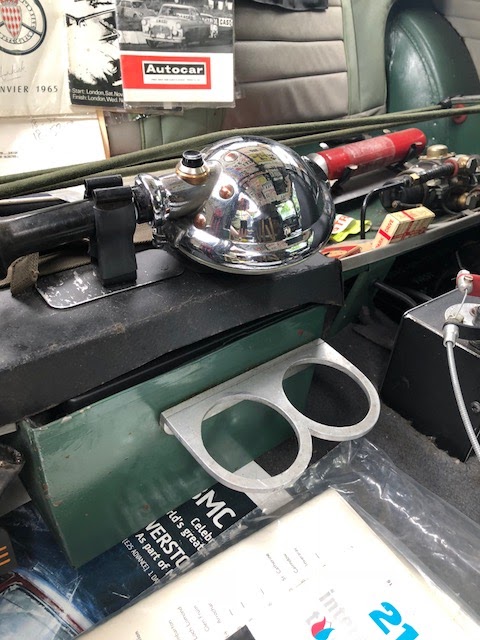 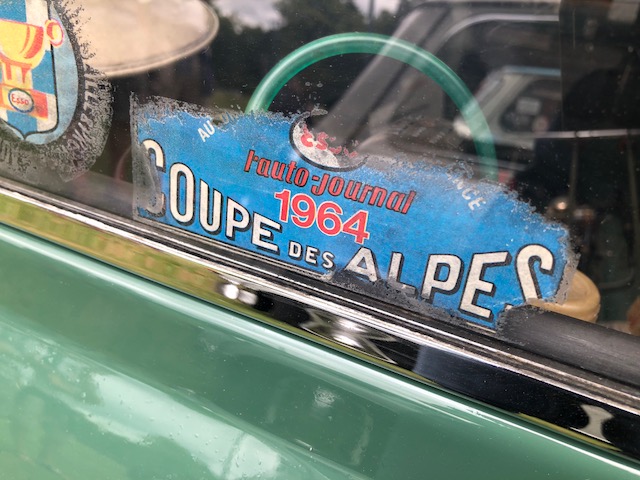 I genuinely couldn’t imagine the Mini with anyone else. Driven and enjoyed.

Sometimes there is something to be said for trying something new, you never know what you might find. So, whether it’s an MGB running a straight six, a Mk1 Golf GTI with a 2.0TFSI engine or a Sierra Cosworth with a Supercharged Mustang lamp, it never hurts to have a bit of variety. There’s a whole world of cool stuff out there and it’s great to see it. 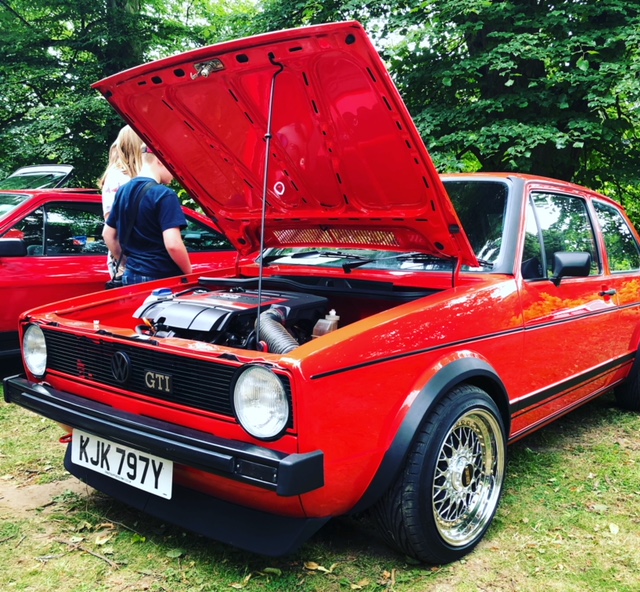 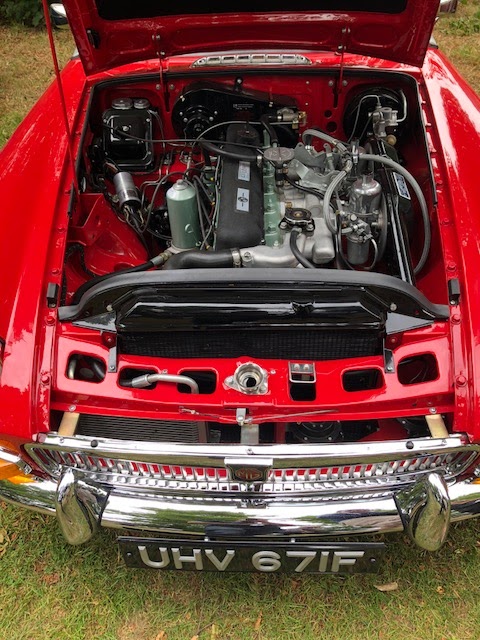 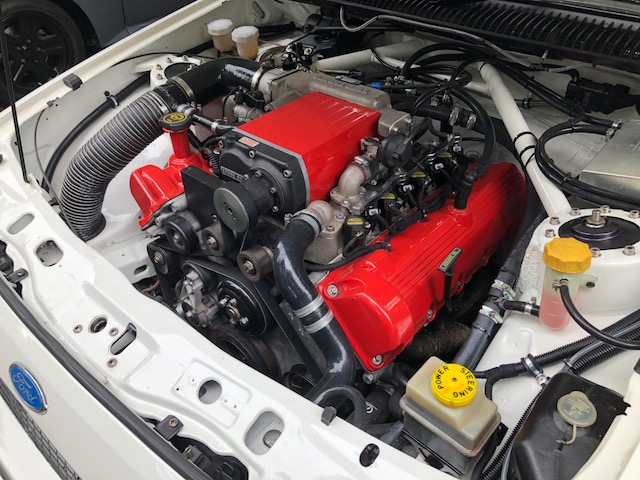 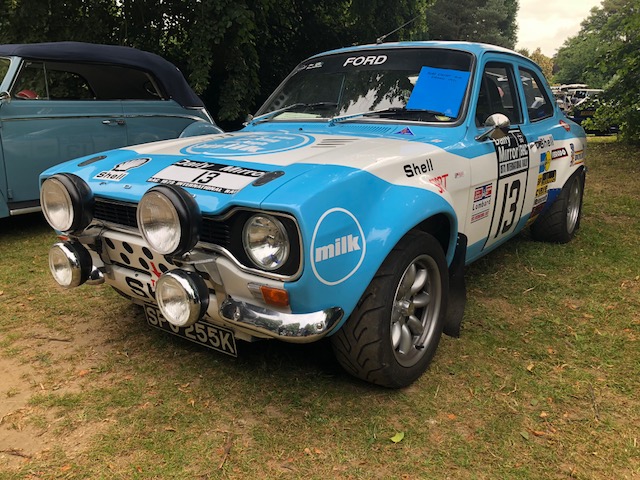 The Onion? Well, yep that’s still in the garage….