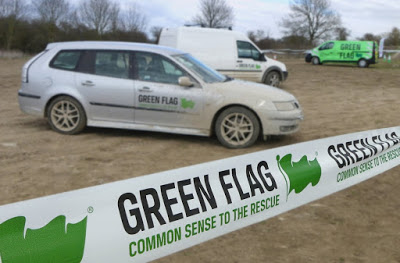 This day out was described with the tagline “Common Sense To The Rescue”…. a curious one considering the vehicles that were chosen to follow a testing route through some challenging Bedfordshire countryside…
Being invited to a site called “Devil’s Pit” provided the first clue as to the nature of the day, and turning in through the front gate gave us the second. This was not going to be for the faint-hearted, or those nervous of a little mud.
The competitive participants for this event were winners before they even arrived, chosen from Green Flag’s Facebook page, and, as they drank cups of coffee and waited for the main proceedings to start, it was clear that the thought of winning £1000, and meeting Love Island’s Chris Hughes possibly outweighed the excitement of driving a Vauxhall Tigra, Saab 9-3 estate, or even the Ford Transit Connect van! 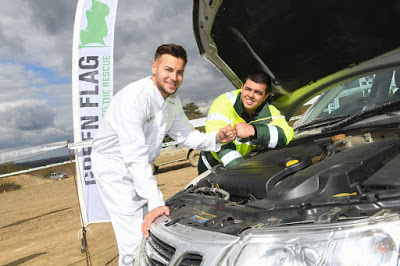 That said, it was the terrain that these vehicles were driving in that provided the real thrills.
Following a course through the mud, the drivers were to make a series of “common sense” decisions to make their journeys easier and get to the finish line without too much incident.

Arguably, the most important “common sense” decision was the choice of vehicle to take onto the course, and I would probably loudly argue none of them! 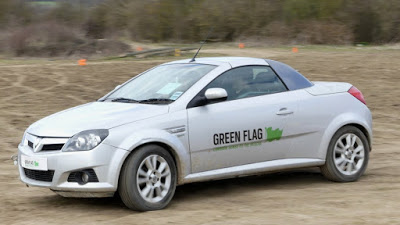 However, not as muddy as it might have been considering the weather we’ve had, but rutted, broken up, and rough enough to think twice about each part of the track, the three normal road vehicles, as it turned out, were reasonably capable “off road”, and the Green Flag technicians, on hand to perform muddy rescues, report that they were not actually needed, but leapt into action, just for show…

(See http://blog.greenflag.com/2018/my-mud-motors-chris-hughes/ for the inside story.)

Another decision each competitor had to make was stopping at the correct fuel for the vehicle, a “common sense” choice that has caught out many a motorist in the real world.
Each driver’s trip was marked by the expert instructors and the £1000 winner, presumably with the most common sense, selected…

Throughout the day a more challenging demonstration route was tackled by ‘real’ off-road drivers, in ‘real’ off-road vehicles, and everyone was given the chance to be a passenger with them. For anyone fooled by the apparent capabilities of the road cars, this route proved that, sometimes, you need a little more!

Another distraction to keep the brain active was a specially adapted Freelander. The adaptation in this case not to make things better but considerably more confusing… The steering was reversed!

Now, I’m sure that there are many motorists who struggle with knowing their left from right, and I imagine a few navigators have been frustrated by their instructions being misinterpreted, but this was certainly not designed to fix that problem.

From conversation, it appears that those of us who put ourselves through this challenge each fell into one of two groups… Group A which found it the most natural thing in the world, and Group B who thought the laws of physics had imploded. Either way, it was a curious experiment… and I’ll let you decide which group Mike falls into…: