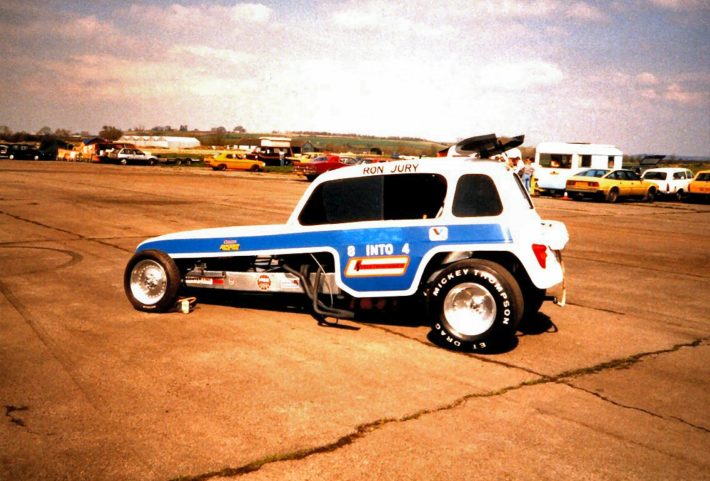 She never really had much of a name, although, given her construction, the female form of Mary Shelley’s Frankenstein might have been the most appropriate… Frankenstina?

As it was, the creature became known as ‘Nockin on’, a reference to the ‘maturity’, shall we say, of her trio of owners/constructors who breathed life into this monster.

Therein lay the seeds of disaster… 3 ageing males, each with a slightly different vision of what should be drag raced as ‘comp altered’.

There were many oddities in that class then, Jag V12 powered minivans, V8 hemi powered Fiat Topolinos, blown Rover Morris 1000s, and any number of monstrous sit up and beg Ford Pops.

The whole class was automotive weird, with veteran hot-rodder George Barris – he of the Munsters Hearse and other bizarre rides – being someone to emulate. Think ‘weird fast’ and with the attitude of a foul mouthed spitting punk.

I arrived slightly late to the party with the basic architecture already decided.

For the record, the eventual recipe was take a completely harmless scrap Renault 4 and throw most of it away!

Cut the body shell longitudinally and remove 2 feet in width…

…Then add 2 feet in length…

…Then create a copy in hand laid fibreglass…

…So, time to construct a new chassis, all aircraft quality welded steel tube with a massive roll cage…

…Add a 3 speed auto with a race torqueflite autobox, the shortest prop shaft, and a narrowed Ford rear end shod with massive US drag slicks on alloy wheels…

…and you have an unusally bizarre looking vehicle! Think of a head on car crash involving a Miro and a Salvador Dali and you have a Gallic comp altered money pit that was frighteningly quick over a very short quarter mile, hence the ritual dropping of the silk undergarments at 440 yards usually reached in around 11 seconds with a top speed of around 155mph. 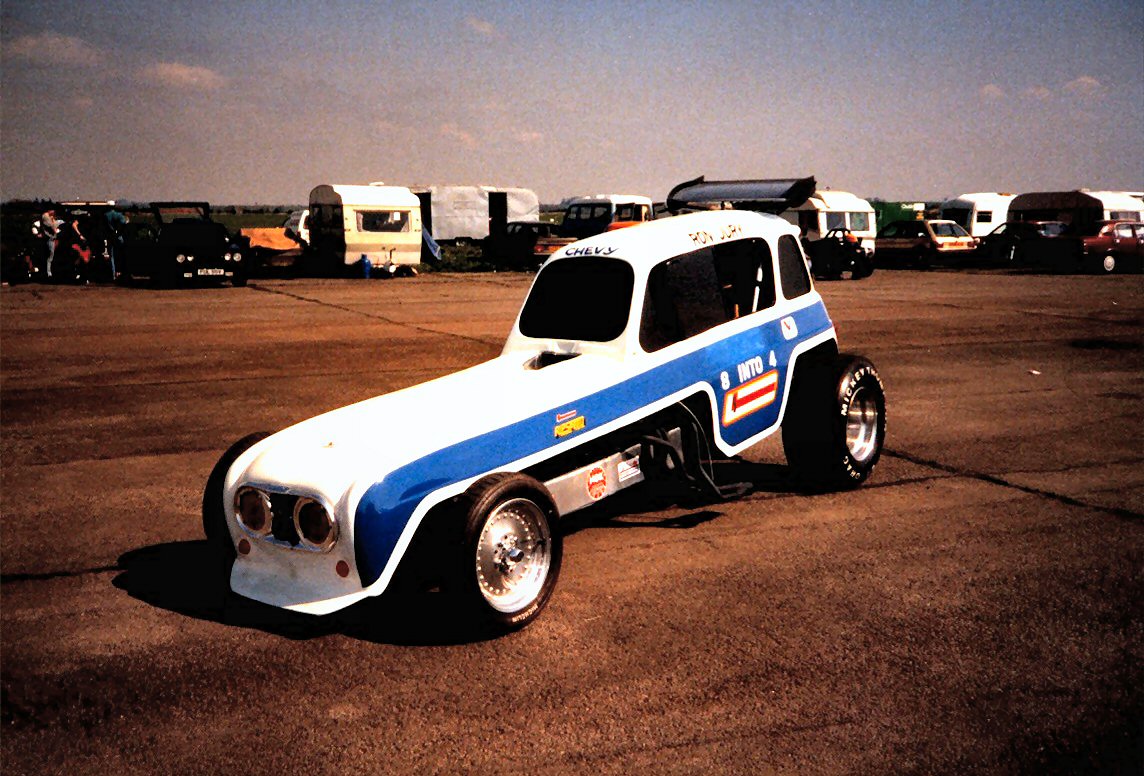 But, this most extraordinary bitsa, while enjoying featuring at glam car shows, and in carnivals and parades, was fragile and prone to floods of tears, destroying cooling systems almost as often as ridiculously expensive auto boxes and shredded rear tyres. 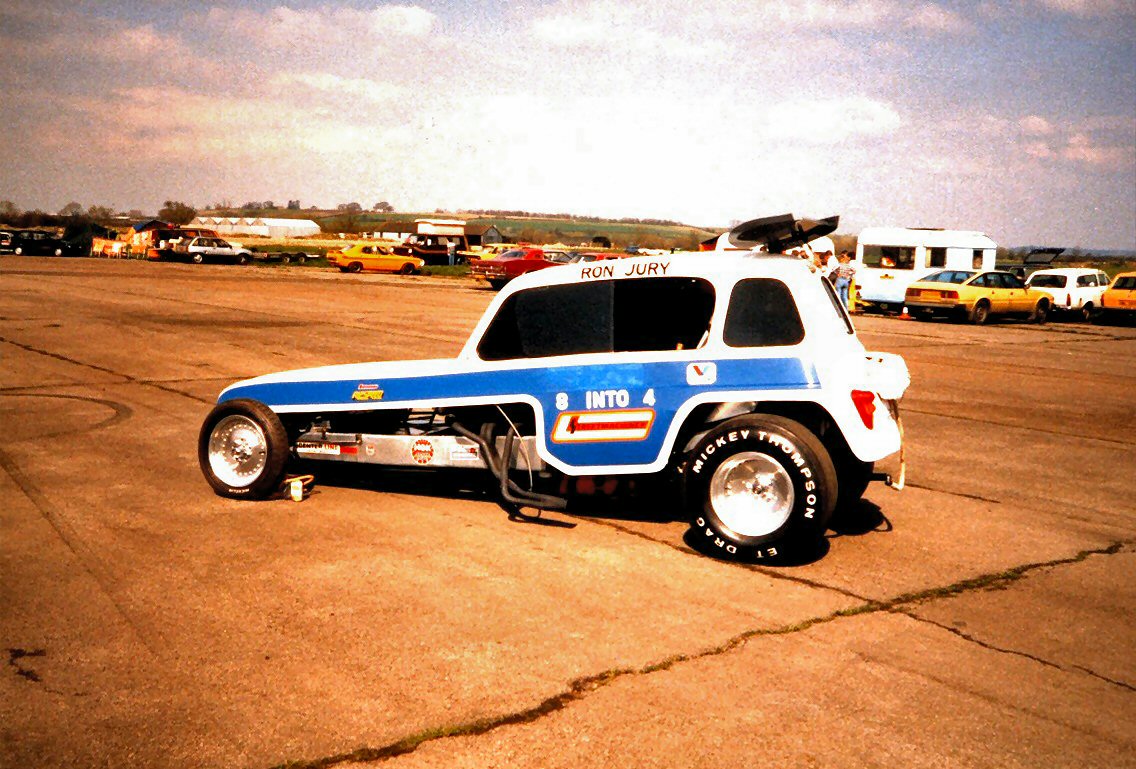 This temperamental behaviour culminated in a disastrous trip to Long Marston.

On the first run the auto and diff locked at about 100 mph and the monster turned 90 left across its own and the other guy’s lane and speared into the barrier. Pete – that event’s driver, we took turns, was well protected and bruised but otherwise unhurt.

Worse was to occur, getting the chase van off the line in a big hurry I stripped 1st and 2nd gear…. Ooops.

When we got back to camp in the paddock, most of the night was spent trying to get the van repaired, but it was not to be. It’s a long way back to Worthing with our VW Camper van towing the chase van with all the kit plus trailer with race car inside. A bizarre and very slow moving convoy with a look, and maybe feel, more like a funeral cortege! 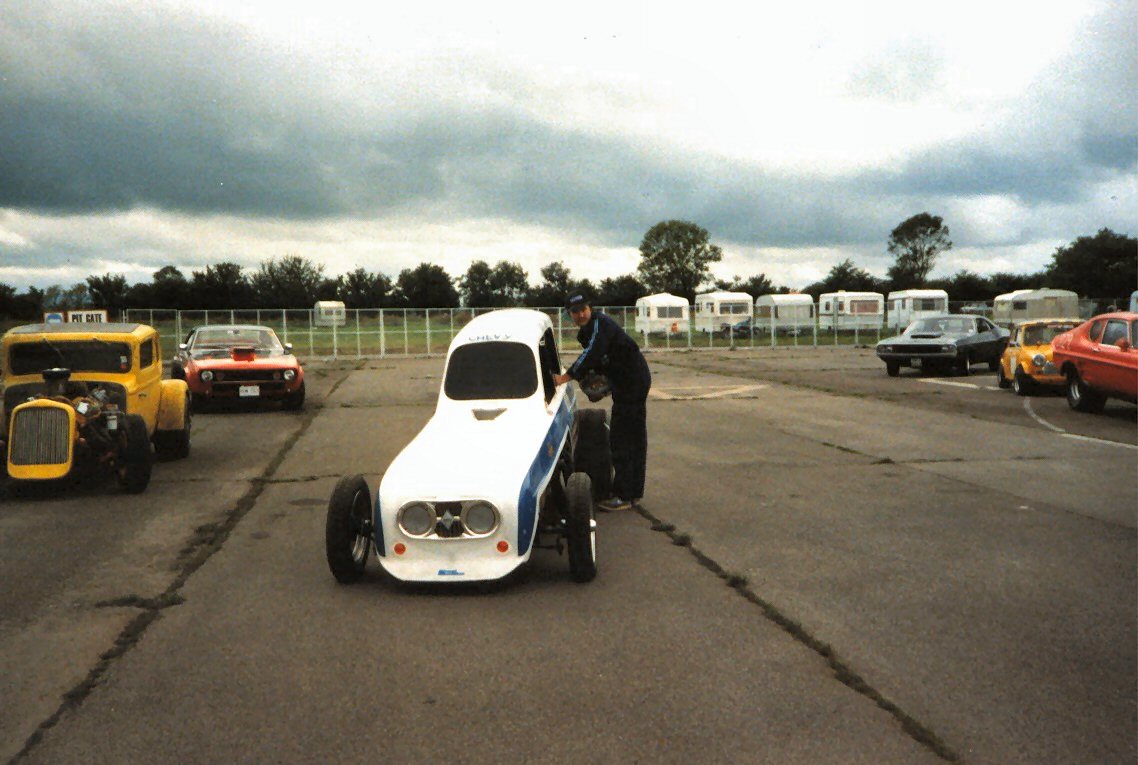 But I hinted this tale of motoring madness ends badly… While the race car was repairable, other elements of this tragic tale were not. She had to go, or else.

So, the remnants of the car were got rid of, too many bad memories, too much grief.

For a while we heard she was parked up, then sold, then sold again… It seemed no one wanted this piece of ill fortune.

However, in a bizarre update, just a few years ago I was standing at Goodwood talking to the legendary drag racer Don Garlits and a photographer acquaintance. I was telling an abridged version of this tale when said photographer announced that he used to own the car! He and a mate had been 3rd or 4th owners after us and had run ‘Knockin on’ for a couple of seasons and then showed it in Belgium whereupon they received an offer they couldn’t refuse.

As far as I know the terrible old lady (for that she now is) remains an accursed hag, a grotesque money pit prone to terrible tantrums, a sort of Marie Celeste, and, no, I don’t ever want her back!

The One That Got Away

Another One That Got Away