Skip to content
Loading...
Latest news
Podcast – Highway Code changes, track car upgrades, and 80s and 90s retro
Podcast – Ho Ho Ho 2021
Podcast – Sir Frank Williams, Christmas Gift Ideas, and Guy Martin on TV
Frank Williams 1942-2021
Podcast – British Motor Show 2022, Sporting Bears, and F1 showdown
motor sport
Over this last weekend, Singapore appeared to be turning into a glittering high rise rail terminus so common were the cries of “all change” in a veritable waterfall of announcements from the majority of F1 teams.
So, continuing my watery analogy, let’s try to fathom out the extent of the flood.
Starting with unpicking the driver moves, as ever there are far too many talents for too few seats.
Mercedes have re-signed Bottas but only for 1 year which gives both parties options for 2019. 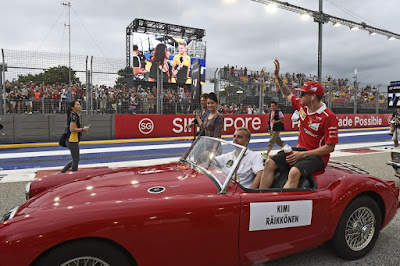 This especially apt as Kimi has also done a 1 year deal with Ferrari for what will probably be his last season in F1, leaving a very desirable seat that many will look towards.
Massa, having already retired from Williams once before, will probably step aside at the end of 2017 in favour of a younger hotshoe.
The principal question is where does Alonso go? Will the engine change chez McLaren persuade the double World Champion to stay on for possibly another rebuilding year? Or will he be persuaded that the Renault engine is ready now? Fernando says he’s waiting for more info before deciding. I believe he will want a chance at a 3rd Championship in a ‘red car’, so will wait a year before moving.
I am reminded of those motor sport historians who reckon Stirling Moss could have won several championships had his car and engine choices been better or luckier, whereas Fangio always seemed to sign for the right team, with the right car and engine, at the right time.
Luck or judgement?
Meanwhile, it looks like Jolyon Palmer is out of Renault to be replaced by Carlos Sainz. Will there be another slot for a talented driver with poor luck? Only his wily dad will know what irons are currently in the metaphorical fire.
It looks like the very patient Pierre Gasly will step up from years as Red Bull test driver to a Toro Rosso drive.
Perez has re-signed at Force India, but his team mate may yet change, and I expect some changes in the sponsorship arrangements. You can only sell so much beer to finance your team.
The merry-go-round has many revolutions yet to go before the 2018 grid is settled.
On the engine front, the biggest change is the (not entirely unexpected) split – by mutual consent – of McLaren and Honda. After 3 dire seasons where the once great team and engine supplier have both lost considerable face, it is certainly a more important loss to Honda than for the recently installed tough Executive Director of McLaren, Zak Brown.
Into McLaren comes Renault with an engine deal of promised parity with the Renault works team. An engine that looks like it should revive McLaren’s fortunes. It is hoped that this will push the orange cars way up the grid, the Honda power unit being by far the weakest component in an otherwise strong McLaren this year.
Honda will go off to power Toro Rosso, but I think this will be a rebuilding year for a demoralised Honda before they do a long term deal with Red Bull.
Red Bull are also rumoured to be in talks with Porsche as an engine supplier, or perhaps the highly profitable sports car maker will even buy the whole team. It can afford to, and retain Horner and both drivers, perhaps in 2019..? This would allow Red Bull (the drinks company, not the team) to reduce its huge spend to that of a sponsor.
Ferrari had a lousy weekend, and there are clearly political machinations again. I suspect a change in senior management is imminent.
Aston Martin, which is currently closely linked with Red Bull, have been rumoured to want to either set up or buy a team. Their MD, while at first reluctant to comment, then offered in a grid interview with DC that they were looking closely at the 20/21 engine regulations and were confident they could produce a package. With a lot of Arabian money in the mix, we could well see Aston Martin on the grid in 2021. Let’s hope they are more successful than the disastrous Jaguar entry of a decade ago.
So as the teams head to Malaysia, expect more team, driver and engine announcements to come. Just bear in mind, through all the speculation, that to be successful, any team needs to have available the mighty resources that brought Mercedes to the top. Even the smallest teams have budgets in excess of £100million…..
Graham Benge