Skip to content
Loading...
Latest news
Podcast – Goodwood Festival of Speed 2022 – Part Two
Podcast – Goodwood Festival of Speed 2022 – Part One
Podcast – F1 Update – Canada
Podcast – Anoraks At The Ready For Cardle, Mini Mokes, and Long Car Journeys
Podcast – F1 Update – Azerbaijan
f1Ferrariformula onejohn surtees
I was sad to hear of the death of John Surtees CBE, famously the only man to win world championships on both 2 wheels and 4.
Our thoughts go out to his family. 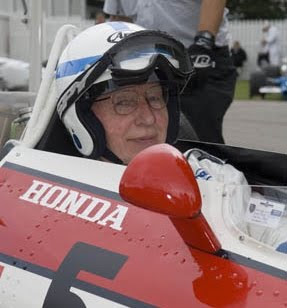 John Surtees won the Formula One World Championship for Ferrari in 1964, and before that, the son of a motorcycle dealer, dominated motorcycling’s highest levels, winning four world motorcycling titles from 1956 to 1960.
In 1962  he transferred his massive skills from 2 to 4 wheels, coming second in only his 2nd F1 race when pitted against such luminaries as Graham Hill. His talents soon caught the eye of Ferrari boss Enzo Ferrari whom he joined in 1963, and won his world title with the following season.
Truly a champion of champions, and having met and interviewed Sir John, yes, I believe  he should have been knighted such were his contributions to motor sports. John was a champion gentleman too,  a very unaggressive and unassuming man and a gentle man, yet in interviewing him many times one one sensed an iron will within. 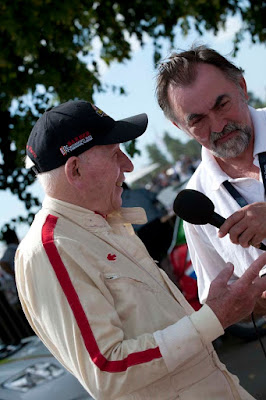 But John seemed to lose heart after the untimely death of his son Henry in a freak motor racing accident. John devoted his tireless energies thereafter to charity works raising millions for charities concerned with head injuries, even selling at auction recently his treasured F1 champions book, a massive tome, an exhaustive history of F1, its ownership limited to only those who had reached the absolute pinnacle of motor sports.
It is extremely unlikely that anyone will ever repeat John’s feats, the times are very different. Like his contemporaries, John could and did drive anything and everything. He was competitive in everything, saloons, sports cars, even the mighty CanAm cars. But it was in the rather fragile Ferrari that his smooth driving style shone, forming a strong relationship with “il Commendatore”, Enzo Ferrari, the legendary boss of Ferrari, though they were later to fall out mostly over safety.
For all his time on 2 wheels and 4, John not only survived in an era when many didn’t, but he had very few crashes, again a testament to his smooth driving.
I will miss his willingness to chat any time we met, especially at Goodwood events which he came to every year. Many will miss him for his talents, others who met him for his charm. His name will stay in the record books for ever and that’s entirely fitting. He achieved every goal he set himself, and there are few who can say that.
RIP John Surtees.
Graham Benge