Skip to content
Loading...
Latest news
Podcast – Goodwood Festival of Speed 2022 – Part One
Podcast – F1 Update – Canada
Podcast – Anoraks At The Ready For Cardle, Mini Mokes, and Long Car Journeys
Podcast – F1 Update – Azerbaijan
Podcast – The Fastest, The Most Expensive, and the Most Fun?
the grand tourtop gear
Well, everyone else has made comment about the newest car show to hit our screens, so I guess it now has to be our turn!
With generous helpings of tongue in cheek humour, stunning photography, and a three-way competitive edge throughout, this “new” show took all the elements that made Top Gear such a success and repackaged them for The Grand Tour. Those of us who are avid credit watchers will note that to achieve this task, many members of the team who were behind Top Gear “of old” have also participated in this new production, and it looks like the experience has shone through. 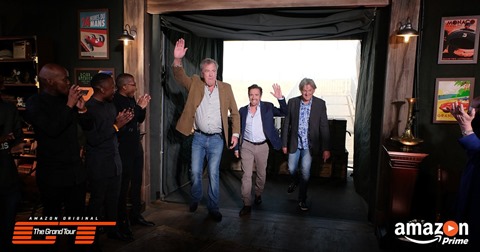 Obviously, for legal reasons, The Grand Tour must be seen as a different format to Top Gear, but I doubt any fans of the “old” show would be disappointed by the familiar elements that have been carried across… Bickering between the presenters, fast cars racing other fast cars, smoking tyres while drifting round corners, timed laps on a new track with amusingly named sections… They’re all there…
Here at UKMotorTalk we have often debated the old question “Is Top Gear still a car programme?”. Arguments usually include “no, it is an entertainment show that includes cars”, and “yes, it is an entertainment show that includes cars”..!!
There can, however, be no doubting from this opening episode of The Grand Tour that cars are still very much central to this “new” format, starting, as it did, with “The Holy Trinity” McLaren/Porsche/Ferrari shootout that was promised before the demise of Top Gear. 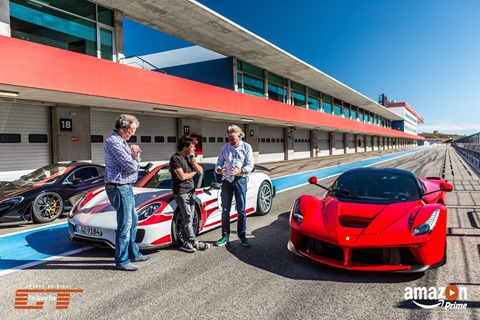 The complex energy recovery systems of the 950hp LaFerrari, Porsche’s 918 Spider with its integrated two electric motors, and the mind blowing technology of the McLaren P1 go head to head (to head!) on the Algrave International Circuit in Portugal. I won’t spoil the result….
So, where does it go from here…? Johannesburg next week… and we believe Rotterdam, Lapland, Whitby, Stuttgart, Nashville, Dubai and Loch Ness are also on the tour.
Fingers crossed for episode two…