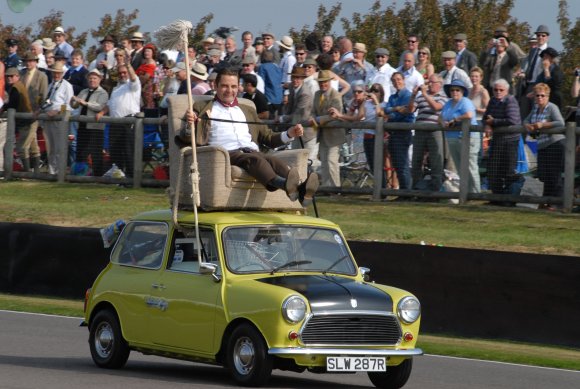 The ‘Armchair control’ Mr Bean Mini, which caused much mayhem at the 2009 Goodwood Revival, is to be auctioned by London specialist auction house – Coys.

Built specially for this, the only live performance by Rowan Atkinson’s Mr Bean character, the mini was driven the wrong way round the track with Mr Bean gate crashing the all-classic Mini parade, only to be chased around the circuit by a period Police Mini Cooper ‘S’ – much to the delight of the capacity crowd.

Rowan Atkinson – in Mr. Bean persona – bumped into Business Secretary Lord Mandelson during the Goodwood event and cheekily remarked: “Ah, Prime Minister.” To which Mandy replied: “Not quite yet“.

The Coys guide to what this unique vehicle, which is promised to be “fully operational”, will be sold for is £12,000 to £20,000. I imagine it will prove a very popular party piece for the successful bidder…. though they’ll have to dress up, or should that be down, as Mr Bean themselves since Rowan Atkinson has said that Goodwood was his first and last live performance as the classic character!

The Goodwood Mr. Bean Mini will be available for viewing at the Royal Horticultural Halls, Westminster, London from Wednesday 10th March.

It will go on sale at the Coys ‘Spring Classics’ sale, which will be held at the Royal Horticultural Halls, London on 11th March 2010 from 7pm.