So the fallout from the recent ‘Crashgate’ continues to settle as we learn that two of Renault’s principal sponsors have jumped ship in the light of the recent murky goings-on.

ING, the Dutch bank which has been the team’s title sponsor since the beginning of the 2007 season has effectively torn up its contract with the Oxfordshire-based outfit, citing its disappointment in their actions at the 2008 Singapore race.

Whilst this is obviously a blow to Renault, it should be remembered that ING along with fellow banking giant and Williams F1 backer RBS were to cease their sponsorship at the end of this season anyway in the light of the recent banking crisis.

There had been much debate regarding the legitimacy of these corporations ‘frittering away’ huge sums of money to have their names emblazoned on what might be seen as the playthings of the rich and famous when only a few short months ago the taxpayer was bailing them out to prevent their demise..

The other aggrieved party in this sponsorship retreat is the Spanish insurance company, Mutua Madrilena, who whilst continuing to back driver Fernando Alonso following his absolvement from having any part in the matter, has also shredded its agreement with the team demanding that their branding be removed from the car with immediate effect.

This will undoubtedly be a humiliating experience for the team as they head into the closing stages of the year, their car and uniforms denuded of the arguably somewhat gaudy livery (in ING’s case at least) of their former backers and troubled by the knowledge that they are, for all the hand-wringing and penitence, damaged goods.

Their task of enticing a new title sponsor to put their name over the door will not be made any easier either by the fact that a whole new gaggle of teams are heading to the grid next year – all of whom will be presenting squeaky-clean and untarnished (as yet) 200mph billboards for potential suitors to adorn with their product names.

Couple this to the fact that number one driver Fernando Alonso is almost certainly going to be wearing red overalls next year and it looks like the Anglo-French operation are going to be experiencing a couple of lean years – assuming of course that the French board don’t decide that enough’s enough and it’s time to throw their considerable weight behind a World Rally Team again..

These withdrawals by the two backers at such a late stage in the year could be seen as slightly cynical opportunism on the part of the two financial institutions, given that Renault aren’t going to be clinching either Driver’s or Constructor’s title this year & earning them some much needed brownie points in a climate where banks in particular are seen as publicly-funded bonus-generating machines, but whatever the reasoning, it’s a sad day for Formula One & the Renault F1 Team in particular when much needed revenue is cut off under such controversial circumstances.

Formula One relies on patronage from big business whether we like it or not and long gone are the days of visually-uncluttered cars circulating in their national colours with maybe just a small sticker exhorting the public to buy Bloggs Oil or Meldrums Patent Mechanical Widgets adorning their flanks.

The FIA have long wanted to see a drastic reduction in costs and, perhaps, if more big-name corporations decide that they don’t want to be associated with what they see as a ‘tricky’ sport they might just get their way as funding becomes harder to come by.

I think that the best we can hope for is that this unpalatable incident is put behind us as soon as possible and that any potential sponsors thinking of entering the fray see what has taken place as a bizarre aberration rather than the norm.

Otherwise we could soon be watching a grid full of cars that all look like a Brawn..

UKMotorTalk
UKMotorTalk, an independent view on motoring and motor sport with impartial road tests, unbiased advice on buying and selling, insurance, taxation and road safety and all the news that affects your car use.Welcome to UKMotorTalk, each month we'll bring you a round up of the world of motoring with road tests, interviews with leading opinion formers, driving hints and tips and a digest of motoring and motor sport news. In fact, everything needed to keep you on the road as an informed driver.For more, visitwww.UKMotorTalk.co.uk
Listen On Apple Podcasts Listen On Google Podcasts
Random Road Tests From SMMT Test Day South

Graham, Helena and Andrew enjoy a day of test drives from the SMMT Test Day South at the sumptuous Oakley Hall Hotel (near Basingstoke!).

Vehicles on test include: 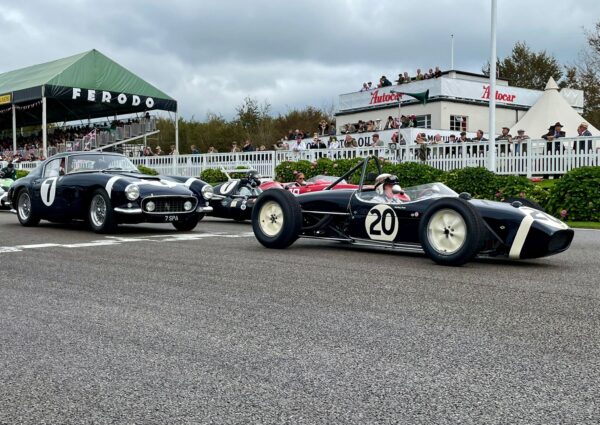