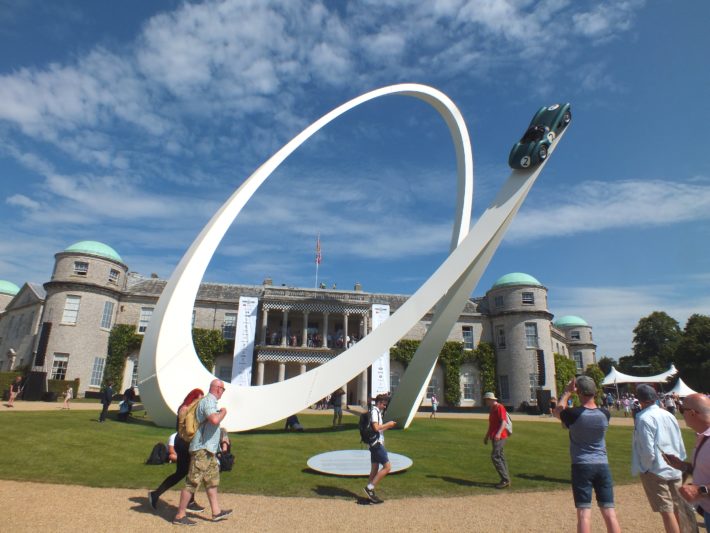 As I recover from the rigours of this year’s Festival of Speed, time for some reflection on an event I have attended almost every day of its 27 years.

I have watched and reported on Goodwood’s motor sport events since before they even had planning permission. Through newspapers and radio, I have championed that permission when the local politics was entirely opposed.

I have seen The Festival of Speed grow from a Sunday afternoon event to the world’s largest historic motorsport gathering. From a guesstimated 15,000 spectators in year 1 to an estimated 300,000 over this year’s 4 day spectacular.

I have always tried to attend every day of every event – illness aside – but the event is now so enormous you would need herculean energies to see it all. You have to have a plan and be highly selective, choose just some items each day because you will need to walk many many miles to see it all.

I have been very lucky. Given my involvement from the very beginning I’ve never had to buy a ticket and have always had a press pass giving me access to everywhere I wanted to go, and everyone I wanted to interview.

The 600 or so cars and bikes running up the hill were valued at £1.8 billion… but that’s just the active part of the event, the biggest draw of the track, the entire site was jam packed every day and the grandstands full.

That value doesn’t include the presence of big stands from all the major, and many minor, car makers, the future technology displays, the anniversary celebrations, the drifting displays, the supercar runs, the fireworks, the auction and so on … and on.

The 20 year old hill climb record set in 1999 by Nick Heidfeld at 41.6 seconds was ‘smashed’ by VW’s all conquering electric racer the ID.R, cutting half a second off the time. Piloted by Le Mans race Romain Dumas, the new record is 41.1 seconds, but Romain tells me he can beat that!!! Pity the ID.R needs 3 40-foot artics to charge it, cool it and supply it… Quite an operation.

The Ferrari display of Michael Schumacher’s championship cars was a fitting tribute in the maestro’s 50th birthday year and on the 25th anniversary of his first championship title.

The Bonham’s auction was more diverse than ever with Nigel Mansell’s ‘Red5’ title winning William’s changing hands at £ 2.7 milion and staying in the UK. Many other fine cars changed hands at a million plus, but unusually some failed to reach their reserve.

The moment that you realise that you REALLY can’t afford ‘RED5’, the 1992 Williams-Renault FW14B F1 car driven by @nigelmansell …@bonhams1793 @fosgoodwood @WilliamsRacing pic.twitter.com/9Nus5kpz3Y

Mercedes must have emptied their museum as they celebrated their 125th successful year in motor racing, with everything from the latest F1 machinery to veterans from the closing years of the 19th century. The legendary Silver Arrows at their finest.

One of my personal highlights was being persuaded onto the Mercedes F1 simulator by my grandson. I’ve often derided these “toys” but I’m converted now, the experience of doing 2 hot laps of Barcelona having convinced me of the authenticity of the experience. It may not exert the full 5 G of braking, but it sure feels like it! The acceleration is breathtaking, and how the drivers do that for up to 2 hours is just awesome. My 5 1/2 year old grandson loved it and now wants to a be racing driver. Given his time driving the Goodwood simulator was a little over 2 minutes he has ‘potential’.

Bentley celebrated their centenary with fine displays both active and static, and Aston Martin featured on the Gerry Judah sculpture marking 70 years of winning at Goodwood. They also arranged the fireworks but avoided a repeat of their 1959 attempt to burn the pits down!

Sir Jackie Stewart’s career was honoured by the presence of many of his cars, and in a wonderful moment he and his two sons drove three of the F1 cars up the hill.

Then there was the rally stage, bigger dustier and faster than ever, the fabulous Red Arrows displays, the off road arena, the massive motor show ….. the list goes and on.

The Duke and his team put on a fabulous show as ever. I’ve met many of my childhood heroes at Goodwood and now I’m hearing F1 hotshoes saying how much they enjoy meeting their idols. Long may it continue and long may I continue to be able to get there!