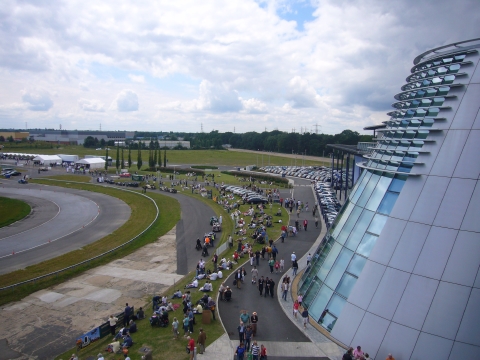 100 years of motor sport to be celebrated as Brooklands Centenary Festival plans are announced.

Brooklands, the first purpose built motor racing circuit in the world, has announced plans to celebrate its centenary this June.

The venue, in Weybridge, Surrey will host a wide range of exciting events over the weekend of 15-17 June 2007, exactly 100 years since it first opened. All weekend the Festival atmosphere will be everywhere, with a fun fair, street entertainers and plenty of refreshments, whilst period costume and myriad vehicles and reminders of the golden age of motor racing will be on display.

Friday evening sees a Grand Centenary Ball at Mercedes-Benz World, and on Saturday the Brooklands Museum hosts an unrivalled display of vintage and veteran cars from clubs and private owners.

Saturday evening sees an Edwardian-themed party in the Brooklands Clubhouse.

Sunday – the actual anniversary day – is the highpoint of the weekend. A recreation of the original Grand Opening Parade will be held on what’s left of the three and a half mile track. Cars will travel along the Finishing Straight, and onto the famous banked circuit.

On the first race day in 1907, Mercedes and Benz cars finished first and second to win the inaugural Montagu Cup.

In its heyday from the 1900s to the 1930s, Brooklands’ slogan used to be “The right crowd and no crowding”. As all 190 acres of the site will be used there will be space for everyone – plus plenty of parking.

As well as commemorating the revolutionary circuit, which paved the way for motor sport becoming more accessible to spectators and competitors alike, the aeronautical history of Brooklands will also be evident.

Brooklands Museum still features many of the original buildings, the 1-in-4 Test Hill and the steepest part of the Members’ Banking, re-opened to the public in 1991.

The Museum now chronicles the achievements of the pioneering men and women who advanced technology on the ground and in the air, and has a superb and ever-growing collection of vehicles and aircraft and memorabilia as well as modern Formula One race cars, the Raleigh Cycle Collection and historic motorcycles.

As Brooklands enjoys its rejuvenation and gets set for its second century, one weekend in June will be the perfect way to rejoice and remember what went before, what made it the home of motor sport, and to welcome the next generation of enthusiasts to the remarkable site.