Skip to content
Loading...
Latest news
Podcast – An All Electric World? Would You Convert Your Classic Car?
Podcast – Rimac’s 1888hp Nevera, Caterham test drive, Toyota’s 10 year warranties, and the smell of Bentley
Podcast – McLaren’s Monaco Gulf Livery, Used Car Price Surge and Onion Update
Podcast – The Future Has Arrived – (Almost) Full-Sized RC Cars and (Barely) Autonomous Driving
Podcast – World Car of the Year, Smart Motorways, and the F1 Emilia Romagna Grand Prix
graham bengemurray walkeropinionrev17
The second most often heard question I am asked at Goodwood – after “Where is Stirling Moss?” – is some variant on “How is” or “Where is Murray Walker?”.
Again, a founding supporter of the Goodwood motor sport events, and widely known as “the voice of Formula 1”, Murray is now nearly 94, and has not been to Goodwood this or last year. His health is not so good.
He still makes frequent TV appearances, they are all now filmed at his home, and he is as witty, incisive and perceptive as ever. Apparently he is also as prone to the odd gaffe as he ever was, but now, unfortunately for us, because they are recorded pieces, they are usually edited out. 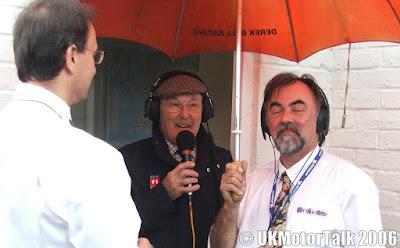 I have known and talked to Murray for well over 25 years and he is one of most engaging people I have ever met.

I spent a couple of hours trapped in a location catering van in a rainstorm with just Murray as company. Two survivors of a downpour that obliterated the event we were both at. He was that day – one I will long remember – charming, friendly, knowledgeable thoughtful observant and provocative in equal measures.

The man whose adrenalin rush delivery made it sound “like a man with his trousers on fire” is calmer and even more charming to just chat with.
Over the years I have spent much time in his company and enjoyed every moment of that time.
For many many years to come, we will hear his voice on the TV coverage of F1. But, for many who met the man himself at Goodwood, and drew such warmth from his company, it is a lesser place without him.

Perhaps next year’s Revival theme should be “the Murray Walker years”? There is certainly plenty of scope there!!!

Join me in wishing Murray good health and hope we may see him again soon.