Skip to content
Loading...
Latest news
Podcast – Is Lewis The Greatest? Don’t Veer For Deer! Is Your Car Getting Fat?
Podcast – Maserati MC20, Smart Roads (or are they?), Bizarre Cars and Access To The Least Exotic Parts Bins
Black Swan Classic Car & Motorcycle Breakfast Meet September 2020
Podcast – A fond farewell to Frank and Claire, congrats to Pierre, and racing of the future
Lewis Hamilton’s X44 in Extreme E
dave wakefieldf1f12017Ferrariformula onekimi raikkonenopinionsebastian vettelsingapore gptatatelevisiontwitterwebsite
If you’re a fan of F1 then you’ll almost certainly have spotted the name and branding of TATA Communications strategically-located in and around the circuits.
As well as being a technical partner of the all-conquering Mercedes team the telecommunications arm of the vast Indian conglomerate is also – and I’ll quote this verbatim given the degree to which Formula1 and its various corporate acolytes like to exercise control over these things – the ‘Official Connectivity Provider‘ in addition to being the “Official Web Hosting And Content Delivery Network Provider Of Formula1.com“.
So there.
Anyway, being pretty cutting-edge, the clever boys and girls at TATA have been working with their counterparts at Formula 1 on enhancing the ‘show’ for the viewer and their latest wheeze has seen them experimenting with 360 degree live video feeds from a race – specifically the recent high-value stock-car smashup that was the Singapore Grand Prix – good timing.. 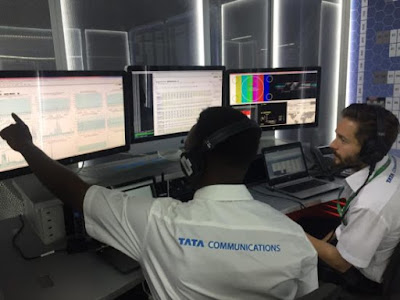 Now, whilst 360 degree video is a relatively new technology it has been available in a number of forms for a few years now – most recognisably in videos available on Youtube where the viewer can pan and tilt the camera either in their browser or Youtube app or alternatively by donning one of the ever-increasing number of virtual-reality headsets whose complexity ranges from a cardboard affair into which one slips their smartphone, right up to the high-end, high-definition devices which imbue the wearer with a sense that he or she has just stepped off the set of the latest Star Wars epic..
Either way, the technology is starting to mature and this hasn’t gone unnoticed by – amongst others – the aforementioned  Formula 1/TATA partnership & whilst other sporting events have dallied with this emerging applied science, their output has been limited – for technical reasons – to a delayed feed, (typically by 30 seconds) which isn’t really ideal if you’re wanting to convey an immersive, live atmosphere to those who weren’t able to make it to the event being relayed.
So, the boffins at TATA got their collective thinking caps on and managed through some form of electronic witchcraft to live stream the recent carbon fibre-strewn proceedings in real time through a pair of 360 degree cameras; one being located in the paddock and the other trackside, so, conceivably you could have followed the fractious relationship between Sebastian Vettel and his team mate from ‘racing incident’ to recriminations and huffiness back at the team motorhome..
At the moment, this experiment in all-round visuals is being treated very much as a proof of concept and we’re probably a few years away from being able to take control of the camera angles from the comfort of our own sofas, but rest-assured – this is a technology which will come into its own within the next decade as the infrastructure and demand for it become ever more pervasive. As mentioned above, Formula 1 is keen to improve the spectacle of the events it stages, not least in the face of increasingly lower audience share and it will undoubtedly see this toe-in-the-water-exercise as a step towards offering the service – perhaps as an additional cost package – in the not-too-distant future.
In this era of video on demand and timeshift recording capability, the consumer is becoming ever more used to deciding what he and she..consumes..and for the die-hard F1 fan, the ability to be able to call the shots is one which I feel will be pretty attractive.
Even with the drop off in viewing figures in recent years, subscription viewing numbers remain fairly healthy and if a value-added service such as TATA and F1 have just trialled is rolled out for a relatively cost-effective fee I wouldn’t be willing to bet against it becoming a popular option for those who want a bit more from their F1 involvement.
Watch this (3D) space I guess..
Dave Wakefield