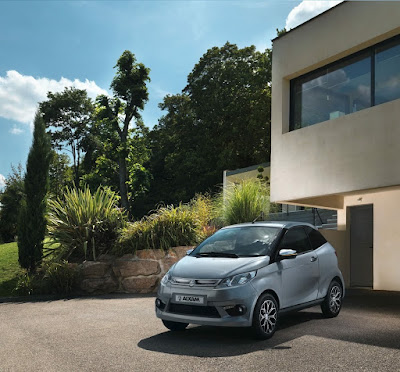 They are very common and seem very popular especially in the countryside.
I suppose the nation that gave us the 2CV and Renault 4 WOULD favour little cars for use in the towns and country.
All seem to have common elements… 4 wheels… 2 doors… 2 seats… a small boot… and most seem to be powered by 250cc motorcycle engines driving some form of clutchless gear system. 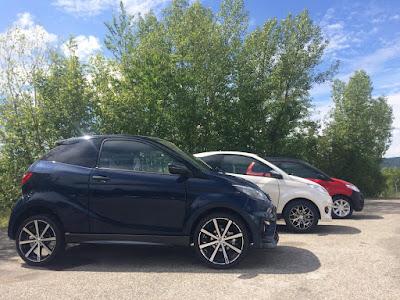 So, very low energy, take up little space, only carry 1 or 2 people for small distances… It all seems very laudable in these environmentally aware days…

These VSP, ‘voiture sans permis’, mini cars exist due to a quirk of French law and can be acquired and driven by teenagers and the elderly. Equally, both groups either unable to begin driving due to age or unable to carry on driving due to advancing age and perhaps a degree of infirmity.

But, there is also a darker side to these cars existence and seeming popularity.
France has long had a serious drink driving problem which it is making strenuous efforts to overcome.
I understand that if you are banned from driving – which can be 12 months or more – then this same quirk of law allows you buy a micro car and start driving again within hours of your full licence being taken away. It would certainly explain some of the popularity of them.

Perhaps WE should adopt these little cars in our towns and cities, but certainly not with virtually unrestricted use as in France.

The UK has regained some control over drink driving in the last decades. The numbers are certainly well down, and it’s no longer socially acceptable to drink and drive.

However, with fewer police patrols, it seems to still happen in the countryside. It certainly does around where I live. All of the pub car parks fill up and then empty again late at night… and, judging by some of the appalling driving and accidents I have seen in recent years, not all of the drivers are drinking orange juice.