Skip to content
Loading...
Latest news
Podcast – Porsche Taycan, Tesla Model 3, Nissan Leaf… You can see the connection!
Are We Ready For An All Electric 2035?
Stirling Moss – In His Own Words
William Medcalf Vintage Bentley – In depth profile
VW Polo – One Lady Owner for 36 years
f1formula onejenson buttonmclaren

It’s often been said of McLaren boss Ron Dennis that he likes to have his cake and eat it and today’s announcement of Jenson Button’s “not a retirement” seems a just about perfect solution for all parties. 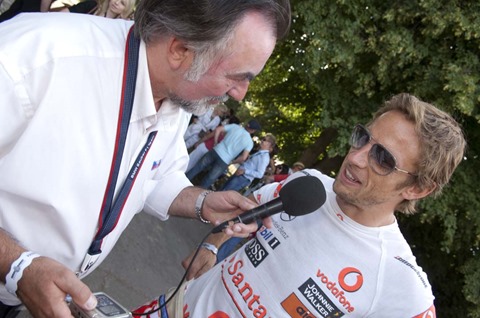 As I alluded to in paying my respects to Felipe Massa only on Thursday, others should choose their time to leave F1.

It had become clear Jenson would make changes this season but where to go? What to do?

I could not see JB heading to either Indycars or sports cars although a TV career seemed very possible.

Ron also wanted new whizz kid Stoffel Vandoorne in a McLaren seat and the sponsorship that he brings with him as McLs poor few seasons have seen even long term sponsors deserting in droves.

But Mr Vandoorne, good as he will prove to be, simply doesn’t have the highly regarded car development skills that JB has honed over nearly 300 GPs, 50 podiums, 15 wins and a World Championship, skills Ron is wise to retain. Yet I have little doubt that Jenson’s fee for 2017 and 18 will reflect his non driving status, Ron is a tough negotiator as Ayrton Senna frequently rued.

7 years with former world beaters McLaren have seen Jenson contribute greatly to their slow but gradual climb out of the pit of F1 despair. He was instrumental in the Honda engine deal then pushed the Japanese car makers very hard both privately and publicly to up their game – and fast – to the point where the team is rapidly climbing back up the grid.

And through those very lean years Jenson kept the faith inspiring others in the team to stay, to persevere, to fight on.

Over the years I have met and interviewed Jenson many times, even before F1. He is immensely likeable, charming, confident and an easy interviewee. He is also very shrewd, sets achievable goals and sees the longer game. (In an interview I recorded with him back in 2008 he displays many, if not all, of these qualities…)

So give a thought to the number of drivers who have become successful team bosses. Quite a few, Jordan, Horner, Sauber, Brabham, Hill, Bruce McLaren, even Ron Dennis himself.

Is JB’s new 2 year contract more than just a development driver role, perhaps a precursor to a team management role, an heir to the mighty Ron empire or at least the F1 bit? If so, I have just written his CV!

But a word of warning Jenson, Ron can be ruthless… Beware the Ides of Whitmarsh.

Or will it be et tu Ron.