Here at UKMotortalk we’re big fans of smart & innovative design and whilst at the recent Goodwood Revival we chanced upon something that really caught our attention.

Now, perhaps you’re one of those really outdoors-y people who like to spend as much time as possible careering down sheer cliff faces on a thousand-speed mountain bike with your mates, or maybe you’re a classic motorcycle fan & enjoy showing off your pristine 1959 BSA Bantam all over Europe.

All well and good, but what are your options if you want to stay over and make the most of a long weekend at your sheer cliff face/classic motorbike meet?

Hotel? Pricey, and if it’s a big event you’re at, probably booked up way in advance.

Caravan perhaps? Ok if there’s room but probably not ideal if you are heading off the beaten track a bit.

The good old tent then? Maybe, but they can take up a fair bit of valuable space in a car, especially if you’ve got all your other gear to lug about to & from your event.

Well, what we discovered on our trip over the road to the more retail & entertainment-focussed part of the Revival might be just what you’re looking for..

Resembling  the progeny of a one night stand between an Ifor Williams trailer & an Ariel Atom, the SylvanSport Go appears at first glance to be a pared-down version of the sort of thing your local gardening firm might use to cart lawnmowers around in if designed by Jonny Ive (for those of you not in the thrall of Apple’s every product release, he designed the iPod, iPad, iPhone, etc). 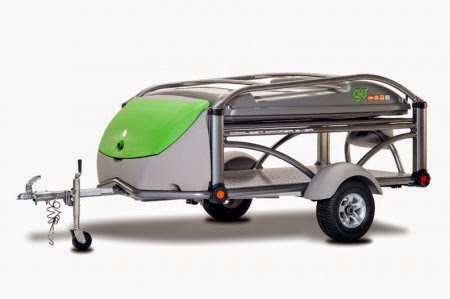 However, look a little more closely and you start to notice that all is not as it might seem, as mounted atop the smart silver-painted tubular framework is what resembles a slimline version of the seemingly-ubiquitous Thule roofbox favoured by Audi A6/BMW 5/Volvo V70 owners up & down the land.

Look a little closer still & you’ll discover some intriguing ring-pulls not dissimilar to the kind you only yank out of a hand grenade if your next action is to lob it as far away from your current location as possible..

Parked next to this apparently compact trailer on the stand was what appeared to be a funky-looking trailer tent from which emerged Steve Downey, the friendly & avuncular proprietor of Valke Outdoors, the Somerset-based importers of the Go, and a man who was about to demonstrate to us just what a clever piece of kit it is. 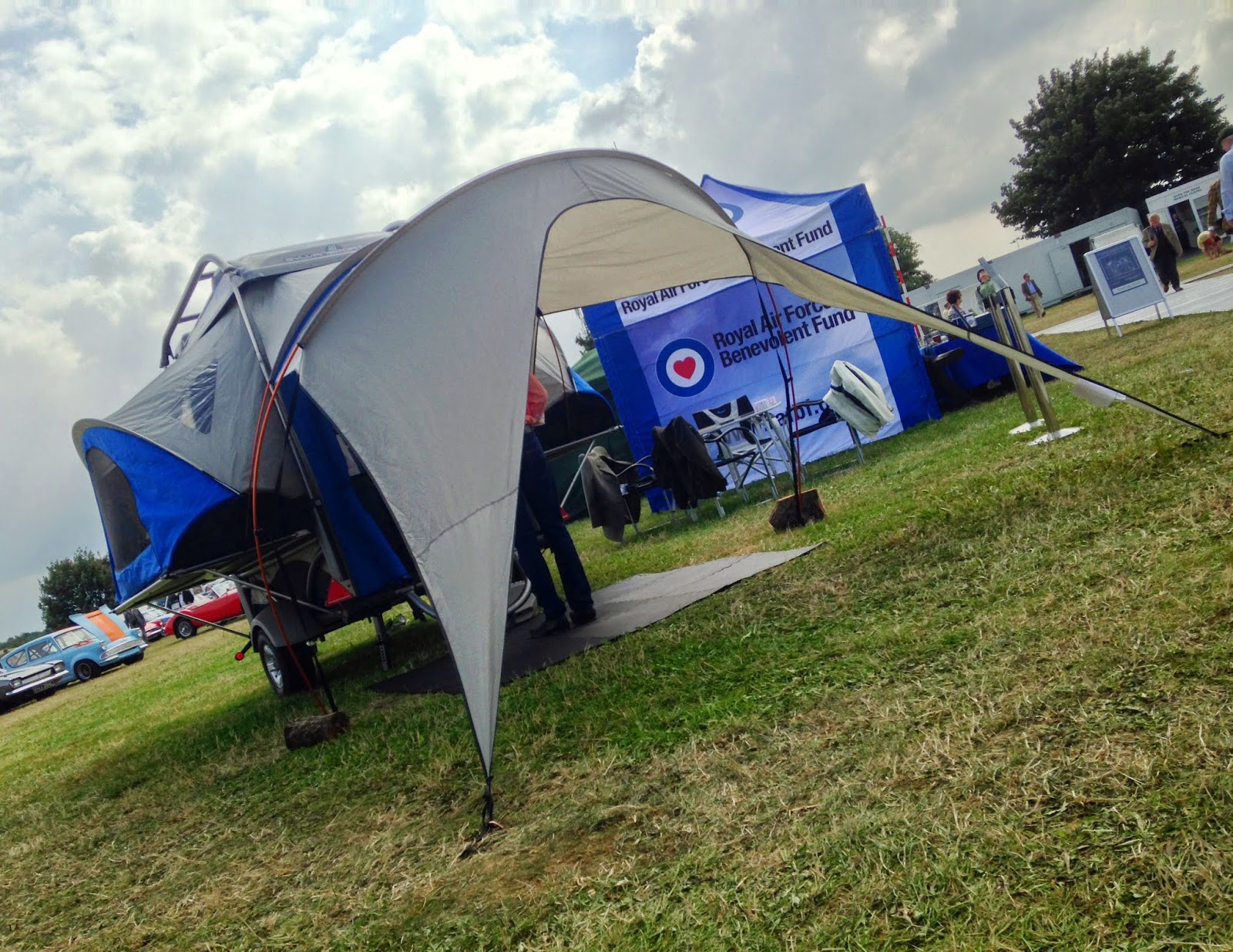 Steve began by telling us that whilst Go is a well-established & well-known product in its native USA – no less an authority than National Geographic calling it “The Coolest Camper Ever” – a slogan prominently displayed on the frame of one of Steve’s demo models –  it’s new to our shores, but he reckons it’ll be a hit once people realise just what it can do.

So, we asked him, what exactly can it do?

Essentially, he explained, it can go from being the low profile futuristic-looking trailer we’d just been wandering round to the airy & spacious accommodation we were now currently sat inside, because, in a feat of packaging of which the afore-mentioned Mr Ive would be proud, all the hi-tech, ripstop fabric currently sheltering us from the West Sussex elements stows neatly away into that deceptively slim roof-box we’d spotted earlier. 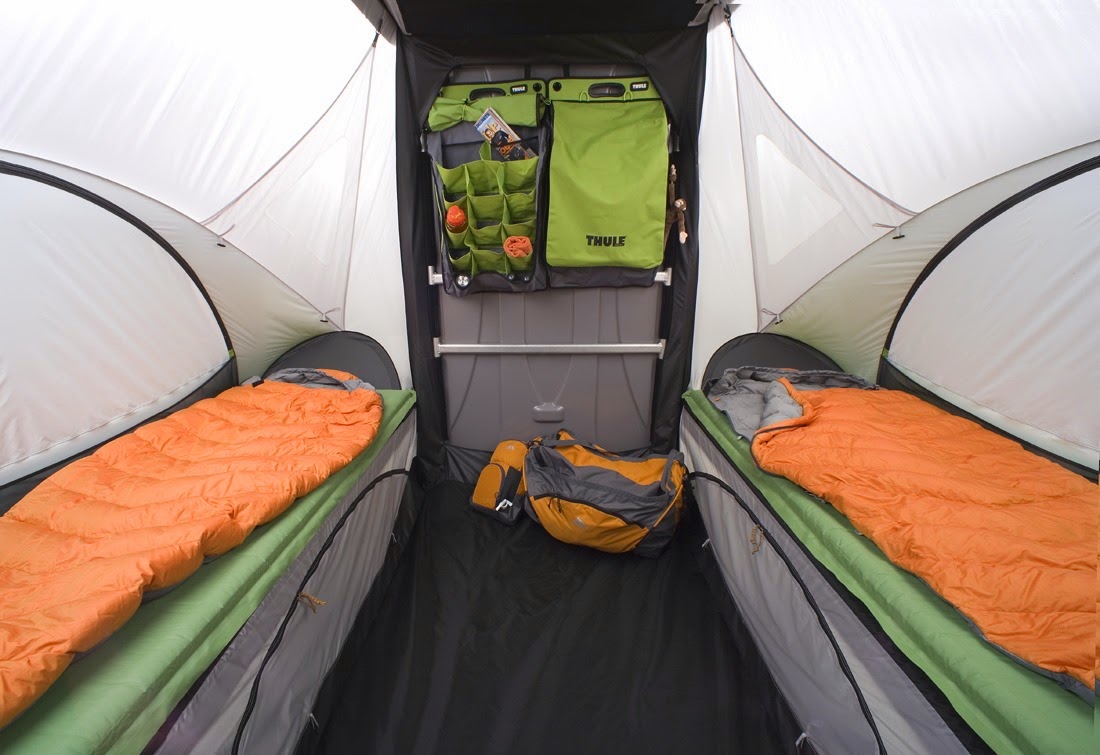 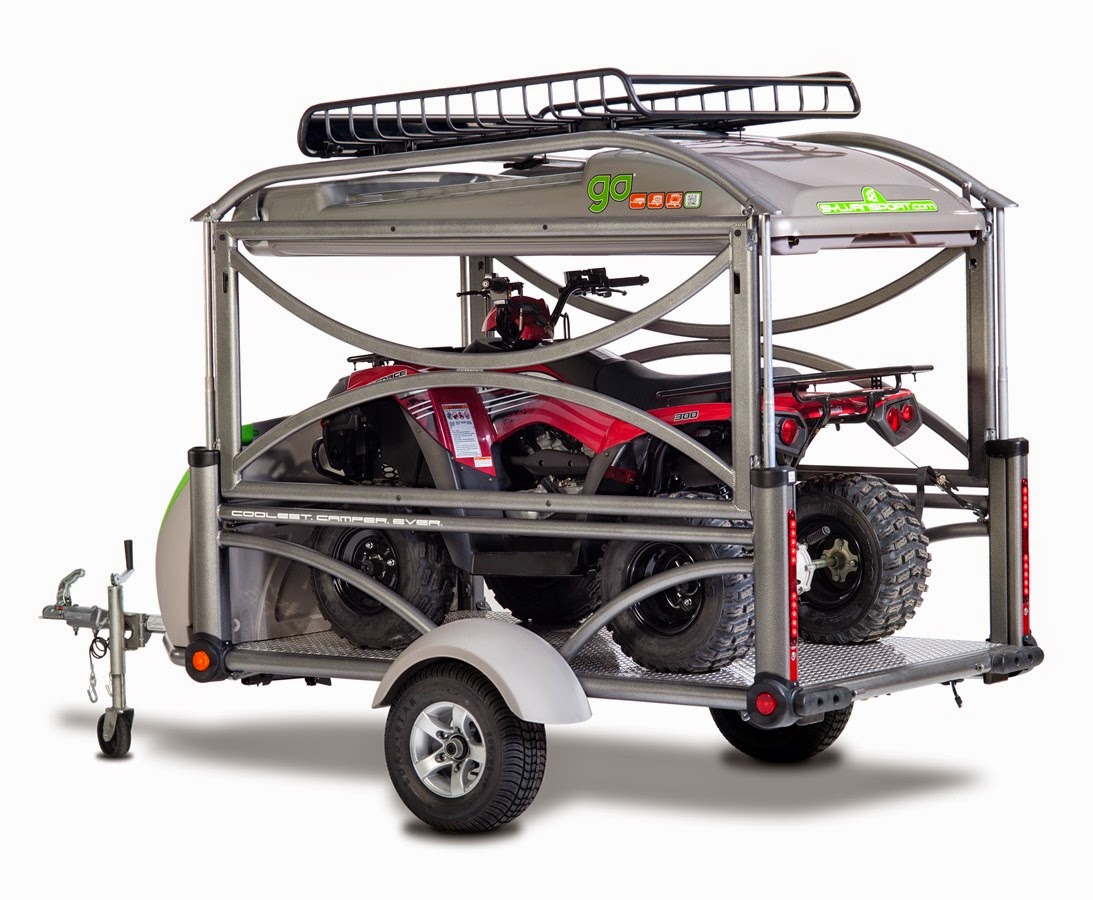 And, into the bargain, the trailer was capable not only of transforming into a place to rest your head after a hard day’s quad-biking, it would transport the quad bike as well.. 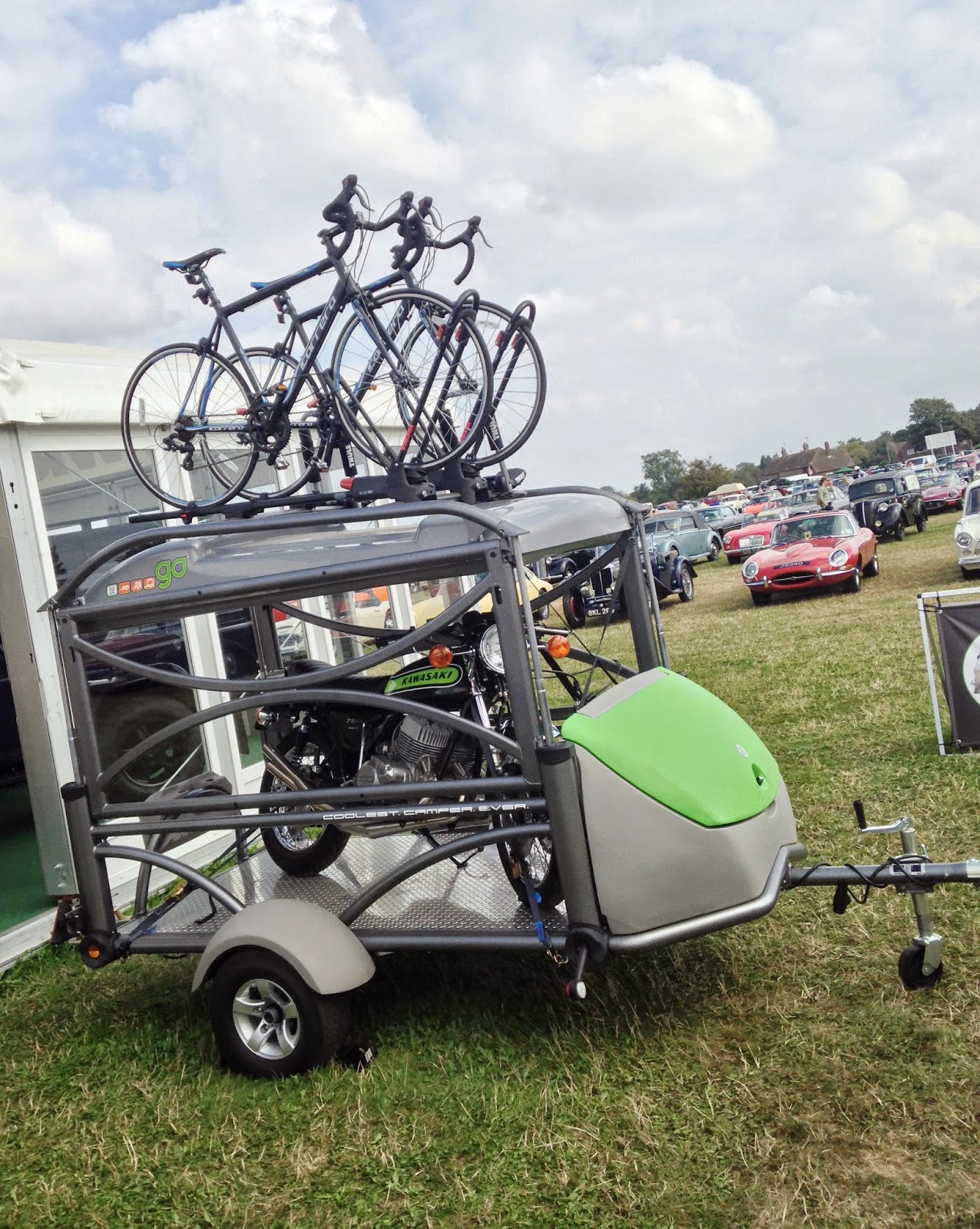 It’s the versatility of the Go which is its real USP it seems. The compact framework we’d seen on the first of the two rigs parked up in Lord March’s back garden actually adjusts in height from 1.3 metres (51 inches in old money) in closed ‘Travel Mode’ up to an impressive 2 metres (79 inches old skool) when transporting your quad bike, jetski, 1/2 tonne of garden waste for the tip etc. 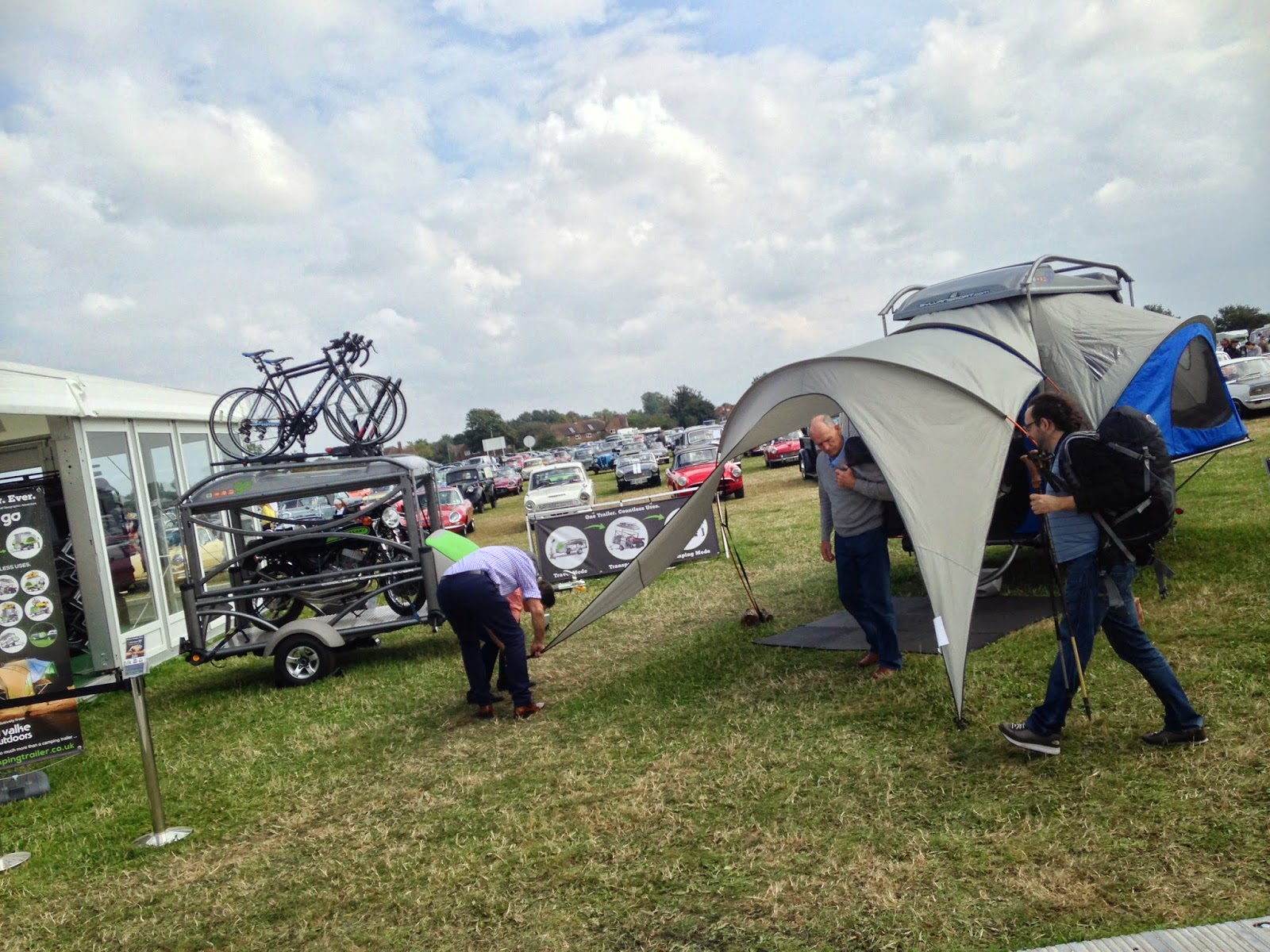 And for those of us who stand somewhat above average height the good news is that in full-on camping mode, the roof height is a vertiginous 2.2 metres (colour) or 87 inches (black and white) so if rock climbing in 6 inch (15cm) heels is your thing, you’ve been thought of too..

Adjusting the height of the trailer to the different configurations is as simple as removing the hand grenade safety pins and winding the mechanism up or down to the required setting using a hand crank attached to the front of the trailer – although Steve can sell you an adaptor for an electric drill if you’re knackered after a day’s hooning in the boondocks. Or just idle.

Other, somewhat more useful accessories offered to complement the Go’s already pretty comprehensive kit list (it comes with self-inflating mattresses for instance) include a handy solar-power system for running low-current LED lights, as well as 12v & USB outlets, essential for charging your iPhone in the middle of nowhere or the Silverstone GP campsite (much the same thing if we’re honest).

Steve sees the Go as a bit of an automotive Swiss Army Knife – today taking the remains of an old kitchen down to the council dump, tomorrow ferrying you & some Lycra-clad chums off to the Fells for a couple of days’ charging up and down on mountain bikes & we’d have to agree, it’s a versatile & clever machine whose rugged construction & ability to travel on less than perfect surfaces might also lend itself to use by the emergency services for use at incidents where a temporary R&R facility could be handy. Even if’s just somewhere to sit & have a warming brew, it could prove attractive to organisations such as HM Coastguard who routinely find themselves stationed away from civilisation when called into action.

At £8994(GB) it’s not exactly cheap – a fairly decent trailer tent will set you back around 5 & half grand – but that’s not the point. The Go will get you there & shelter you in reasonable comfort but it’ll also take all your kit into the bargain  – or ‘toys’ as Steve smilingly referred to them – & that so far as we can see is a unique proposition.