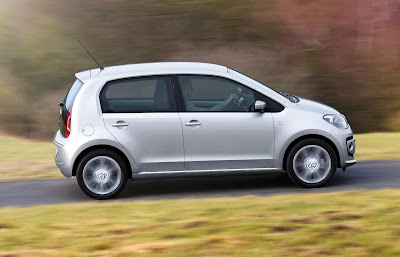 The Volkswagen UP! (their exclamation mark, not ours..), the Seat Mii, and Skoda Citigo have garnered another trophy by winning the inaugural….

….MoneySupermarket Car of the Year Competition
This is a new annual competition where some of the most highly-qualified and knowledgeable motoring experts on the Web are asked to vote for what they believe to have been the 10 best cars of the past 12 months and UKMotorTalk was delighted to be chosen by MoneySupermarket to be one of the websites selected to help judge the competition.
Each judge’s nominations were awarded a score between 1 and 10, with their top vehicle being given 10 points and their 10th nomination being awarded a single point. MoneySupermarket then collated all of the results and came up with a definitive top 10 which best represented the opinions of the overall motoring community.
The UP!, Mii and Citigo were a universally popular choice thanks to their stylish design and fuel-efficient nature, but they only just narrowly pipped the impressive BMW 320d to overall honours by a meagre two points.
The Range Rover Evoque was a strong third, proving to be another popular choice with judges thanks to its trendsetting styling which is something of a radical departure for Land Rover. And, in the interests of transparency, it was also the top choice of the team here at UKMotorTalk.
Perhaps the Range Rover’s failure to obtain overall top spot owes more than a little to the rising price of fuel at the pumps, which has resulted in fuel efficiency proving to be an increasingly important area of differentiation and one on which many of the judges appeared to place a greater emphasis.
Overall though, German manufacturers dominated the competition, picking up more than double the amount of points of the Japanese car brands who were a distant second.
British brands ranked a respectable third, owing largely to the popularity of the Range Rover Evoque and the radical new Vauxhall Ampera which came in 6th. Vauxhall was the most popular British manufacturer in terms of points accumulated in 8th place with 4 separate Vauxhall vehicles having been nominated for inclusion by judges.
MoneySupermarket have produced the following infographic highlighting the overall top ten in what it hopes will turn out to be an annual competition:

Image source: MoneySupermarket Car Insurance
So, congratulations to Volkswagen, Seat and Skoda on this strong showing for their new baby – It’ll be interesting to see whether the trend next year continues to reflect the ever-increasing popularity of frugal little cars such as the UP!
UKMT