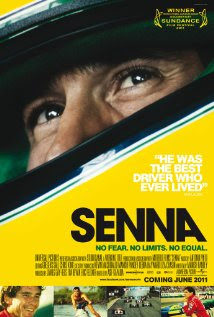 Even before the birth of my son & heir we weren’t really big cinema-goers in our household & since his arrival on the scene 3 & a bit years ago neither his mother or I have crossed the threshold of a multiplex once.
With the cinematic release of the much-feted ‘Senna’ this month though, the balance was very much ready to be redressed and yesterday evening saw four of the UKMT team pile into the cosy confines of the Odeon in Richmond to pay tribute to the much-lamented Brazilian.
It can be assumed that anyone with even a passing interest in current(ish) Formula 1 will be aware of Ayrton Senna Da Silva as, whether or not they’re old enough to have watched him race at the time – either in person or on television – his domination of the sport and his subsequent legacy have left an indelible mark on motor racing’s premier league & his untimely departure from the ranks arguably still casts a long shadow seventeen years on.
So, I think it’s true to say that we all approached this movie with mixed emotions.
Undoubtedly, as confirmed F1 fans of long-standing we were looking forward to re-living one of the most exciting eras for the sport, an era which seemed less bound up in the glossy & hugely stage-managed global entertainment package produced and ruthlessly administered by one Bernard Ecclestone Esq than it does today..
However, whilst looking forward to re-acquainting ourselves with the F1 of old – the wide wheels & big wings, the long departed names and venues (and in Ron Dennis & Adrian Newey’s cases, hair) – there existed a leavening thought, a dread feeling that we all knew that this story could only have one ultimate conclusion, the tragic and violent death of its protagonist.
No IMDB plot-spoiler warnings required here..
Knowing that the film was building towards its inevitable finale though perhaps made us focus more on the ‘here and now’ elements of the movie; letting us linger on the youthful Ayrton Senna as he helped his father assemble the engine of his all-conquering go-kart in footage from one of many painstakingly-sourced home movies, or making us smile at the way he treated an awe-struck Japanese fan as if she was the only girl in the world that mattered to him as he kissed her goodbye.
These peeks around the curtain were liberally dotted throughout the film, revealing the very human, caring, God-fearing person that Ayrton (pronounced predominantly “Eye-airton” by most of the interviewees incidentally) undoubtedly was & they sat uncomfortably – and quite deliberately – with footage of Senna’s other, darker, ruthless, driven persona.
As we watched his relationship with erstwhile team mate, and latterly Ferrari rival, Alain Prost turn from mutual respect to outright hostility via two major crashes in Suzuka & all points inbetween we were left wondering whether he genuinely believed that his God-given talent bestowed upon him a God-given right to force his way to the tops of the timesheets, regardless of who might be in his way..
Judging from the remarkable footage obtained from a couple of drivers’ safety briefings of the time you could be forgiven for thinking that Jean-Marie Balestre, the controversial ‘Grandee’ FIA head honcho at the time of Senna’s career, was certainly more in favour of the view from the Prost camp that Ayrton was a danger to himself & others as he professed a belief that God was helping with the driving.
The fact that both Prost & Balestre shared a nationality and not just a thick and at times inpenetrable accent was not lost on the film makers as they (archly, maybe?) presented footage of the head of the FIA playfully carousing with the French driver in a pit garage – one thing Jean-Marie’s successor could probably quite safely not be accused of..
The film told of how Senna’s third title & his patriotic celebration of his country had afforded him a legendary, fanatical following in Brazil – a country which at the time took very little pride in itself & was beset (as indeed it still is today) with searing poverty & deprivation.
His countrymen were starting to take pride in themselves as Senna traditionally celebrated his wins with a Brazilian flag held aloft on his slowing down laps.
Behind the scenes, Senna was making sizeable charitable donations to needy causes in his country & was beginning to put in place more formal arrangements in order to help more of the people who adored him.

Of course, the whole weekend had been a disaster from the outset when Rubens Barrichello’s Jordan speared off the circuit in the Friday practice session, leaving him unconscious and requiring evacuation to the medical centre to where Senna fled to check on the condition of his countryman & protege. Barrichello fortunately escaped with a broken nose & injured arm but would take no further part in the fateful weekend’s activities.
Then, as if Formula 1 – and Senna in particular – wasn’t shaken up enough by Rubens’ lucky escape, Simtek’s (remember them?) likeable rookie driver Roland Ratzenberger was killed when his front wing failed at high speed at Villeneuve and he smashed into bare concrete, fracturing his skull.
Professor Sid Watkins, the long time FIA medical expert and Neurosurgeon recalled how he had taken Senna to one side as they stood near to where Ratzenberger had perished and tried to convince his friend – who was obviously in great distress – to give up Formula 1 & to join the Prof in retirement, fishing – a pastime of which both were fond.
Senna though, despite it all, said he couldn’t & the regret in Prof. Watkins’ disembodied voice was evident for all to hear..

The crash, when it came, made use of most of the footage we’ve all seen countless times.

The long-distance shot looking back from Villeneuve to Tamburello, the on-board footage from Senna’s Williams & Schumacher’s pursuing Bennetton all grimly familiar as they depicted the violent end of the life of one of, if not the most naturally-talented Grand Prix drivers of the modern era.
British F1 viewers were actually spared some of the more unpleasant & intrusive helicopter footage of the aftermath in 1994 as, coincidentally, the BBC were using their new Outside Broadcast truck at San Marino for the first time, so were able to cut away to something somewhat more palatable. In the film however, the unfolding disaster as medics raced to reach the lifeless body in what remained of his car was played out in excrutiating detail as we watched the ultimately futile attempts to resuscitate Senna.
Sid Watkins – who performed an emergency trachaeotomy at the trackside to get Senna breathing – recalled how even though he’s a confirmed agnostic, he sensed his friend’s soul leave his body with a sigh..
In case anybody watching this film was left in any doubt whatsoever as to the reverence & adulation that Brazil felt for Senna, footage of the return of his body to his homeland & scenes of his funeral should have soon helped convince them of his almost regal status in the troubled nation.
Hysterical outpourings of grief as Ayrton’s body was conveyed first by fire engine and then by the strength of his family & F1 drivers past & present to his final resting place only served to show that the world had suffered a devastating loss with the nation of Brazil feeling the passing of their favourite son most keenly of all.
You’re reminded at the end of the film that whilst Senna may have died at such a tragically young age, his legacy is still very important – in particular through the work of the Ayrton Senna Institute which, administered by Senna’s sister Viviane, continues to help the underprivileged in Brazil.

As a footnote to this caption, it’s noted that Alain Prost is one of the Foundation’s trustees..

I believe that the one overwhelming feeling that one comes away with after watching ‘Senna’ is a feeling of regret, a deep sadness that someone so talented & charismatic was taken long before his time.
Whilst, perhaps, he was starting to reach the latter years of his career, Senna was evidently still on top of his game – witness his pole position in his final race in what were very trying conditions for him personally.
Had Williams managed to get to grips with the deficiencies of the FW16 sooner, what sort of a battle might we have seen between the old stager & the young pretender to his throne?

One positive we can draw from Senna’s death though is the fact that safety in Grand Prix racing is now a world away from how it was in that torrid 1994 season. Drivers today stand a far greater chance of walking away from crashes which, back in the days of low cockpit sides & truncated nose cones, would almost certainly have killed them or at best crippled them for life.
Whilst Senna’s accident was freakish – as one commentator put it: ‘his luck just ran out’ – we have thankfully been spared a repeat of a driver fatality for 17 years.

And for that, we must be grateful.

‘Senna’ is in cinemas nationwide now, rated 12A (UK)