Sunday August the 8th 2010 saw the 25th Anniversary of the annual Ford Fair event at Silverstone circuit, and UKMT were very pleased to be in attendance as guests of Ford UK.

For anyone familiar with car club shows and events, this one beats the rest into the shade for sheer scale alone. Local roads were nose to tail with Fords of every variety in the run up to the 9am opening of the main gates and scenes were reminiscent of those before the Silverstone GP.

We were due to meet our hosts before the gates opened and were stunned to find gridlock after leaving our hotel. Our decision to come in a Honda paid off though, as we were able to push in to several queues, justifying our rudeness by suggesting to other users that we were in fact, NOT attending the event and on our way somewhere else..

We started our day over at the Ford Live Action Arena. Throughout the day, stunt driver Paul Swift entertained the crowds with breathtaking displays in various Ford models. 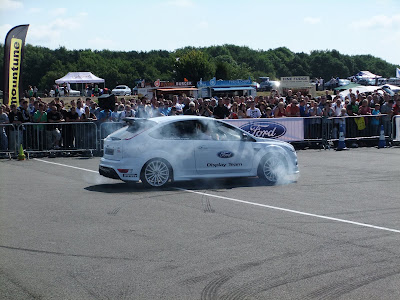 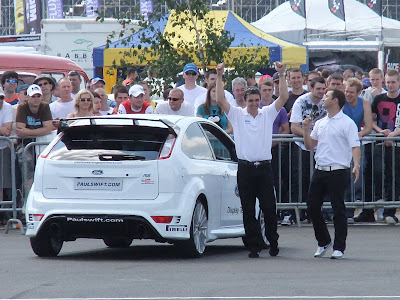 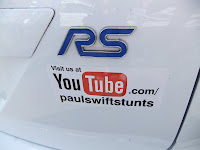 Our first task for the day was to complete a seemingly simple Autotest type course, weaving between cones and negotiating parking bays in a timed run. It looked straightforward from a standing position, but getting into the Ford Kuga for a practice run was actually pretty nerve-wracking. The turns were tight and our timed run was marred by a delayed start and by a stall. Still, we managed a respectable third place from the assembled bloggers (and no cones were damaged). 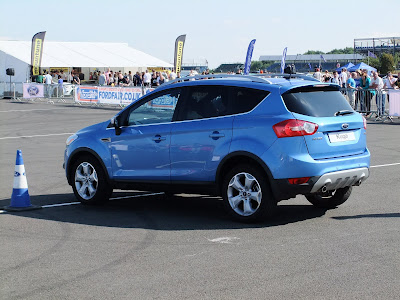 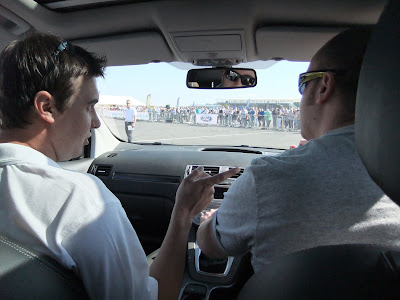 Despite the stall, it was quite remarkable as to just how manoeuvrable the Kuga was. Somehow, despite being a familiar sight on our roads for the last couple of years since launch, this car has managed to pass us by and this brief stint in the arena was enough to convince that it is worthy of further consideration. It was a bold move by Ford to use what is perceived as an SUV on a course perhaps more suited to their nimbler Fiesta model. At the hands of amateurs such as ourselves, it managed the course with ease – albeit in a time pretty much twice that of (professional) stunt driver Paul Swift.

The arena’s focus changed as the morning progressed, and hourly choreographed shows began. Paul treated us to demonstrations of alternative methods of parallel parking, using his ultra-impressive Ford Focus RS. For those not familiar with this extreme version of Ford’s popular hatchback, it bears little relation to the common or garden 1.6 Style.. 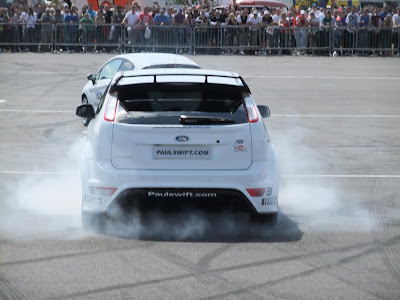 Under the bonnet, Ford have squeezed in a 2.5 litre, 300BHP in-line 5 cylinder turbocharged petrol engine, borrowed from former stablemate Volvo. You’d imagine that this would be a handful with only front wheel drive, but the car danced around obstacles without difficulty.
In fact, the car literally danced – in a set-piece choreographed to music, the crowd was amazed as Paul treated one of the Ford PR girls to a sort of petrol-fuelled Swan Lake, complete with an atmospheric array of special effects provided solely by unburned hydrocarbons and tortured Pirellis. 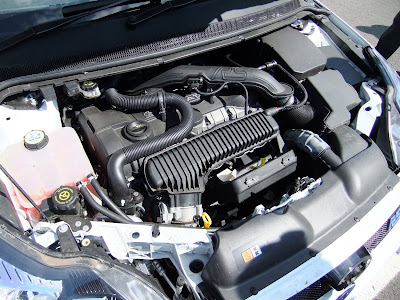 Somewhat tellingly, three sets of tyres had been provided by the manufacturer to assist with the display. . 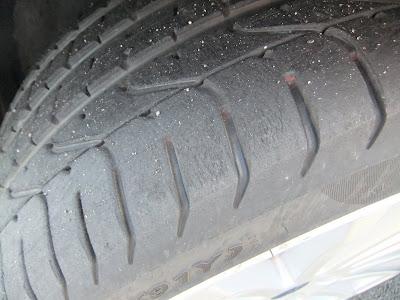 Just as our eyes had finished goggling from the skill shown by Paul, it became apparent that our services were required with the finale of the show. A diesel Fiesta was chosen for this piece, and although the final drive was as a much more sedate pace than before, we should point out that it was completed on two wheels, & additionally that whilst one of the UKMT team was sat next to Paul Swift, the other was in the boot.. 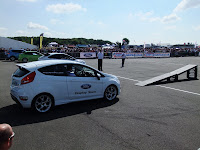 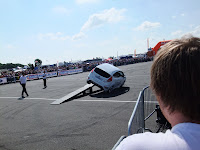 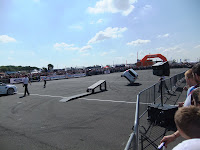 Consequently, our account of this grand finale is somewhat mixed. From the front seat, the experience was likened to being on a roller coaster. From the boot, it was best described as being akin to having been inserted into a washing machine as the spin cycle came to an end. Your boot-bound correspondent nearly managed to bite his tongue off as the car came to earth, but this did not detract from the realisation that it was the supreme ability of this very experienced stunt driver that prevented anything worse from happening. And it’s not everyone who can boast of having been in the boot in such circumstances. 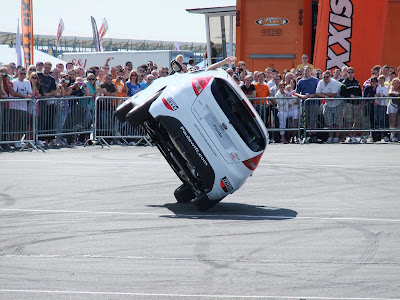 After a fish and chip lunch (note – nothing eaten prior to the arena experience) we made our way around the event to look at the club stands and watch some of the other entertainment on offer. A section of the circuit was dedicated to a display of drifting during the afternoon. This form of motorsport originated in Japan more than 30 years ago and has transplanted itself well into the British Motorsport scene. It’s not surprising as you could argue that it is the most spectacular form of circuit racing. We watched as a collection of rear wheel drive Escorts, Sierras (and a Ford powered Toyota Starlet of all things) kicked up huge clouds of blue smoke from their tyres, their drivers oversteering furiously around the Brooklands part of the circuit.

To the uninitiated, choosing what to look at next was a pretty daunting experience. The club stands extended acres from the circuit to the huge car parks and encompassed almost every type of Ford imaginable. 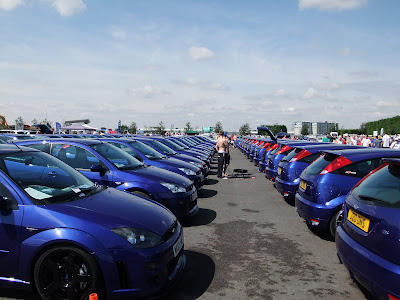 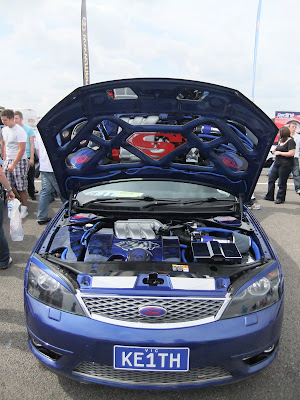 Many of them had been modified by their owners – including the selection of obsessively well-
prepared concours vehicles. Our favourite of these was a truly immaculate Mk1 Ford Capri 3000GT, finished in a period metallic green. 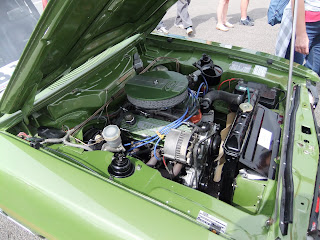 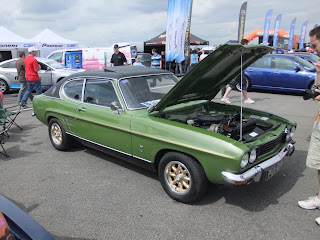 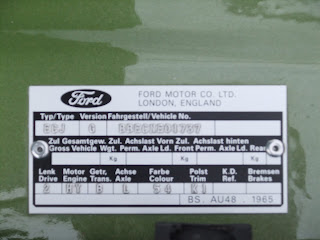 It became so very easy to get lost in a sea of Escorts, Mondeos and other more modern kit that it was the classic cars that really stood out on the day. Perhaps the most startling reminder of how things used to be, was brought to mind via the nostrils – as hundreds of uncatalysed, carburettered petrol engines burbled their way around the site, bringing back memories of crowded cities past. It may also have accounted for the headaches both of us went home with.

There are a great many car shows and events throughout the British Summer and Ford Fair has to be the biggest. Whether or not it is the best will depend on your taste in cars, but if you love things automotive (and if you are reading this, let’s assume you do) this is a show not to be missed. Whether you are a fan of Ford or not, you – and everyone you know – will be able to tell you a story about something that happened in a Ford. It’s an inevitable consequence of being ubiquitous.

It might be a description of your first drive home from hospital after you were born, or your first car aged 17, or indeed the first time you ended up on your head in a ditch after the Orion your mate borrowed off his Dad skidded on black ice. 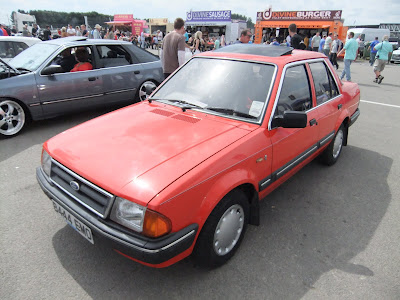 Walking around a show like this encourages memories and tale-telling and that’s not something you get everywhere.

Ford Fair – perhaps this is the most democratic motoring event of the year?

A very big thank you should go to Ford UK and the very friendly, welcoming and inspiring team from Wunderman who invited us along.

We’re all very much looking forward to another massive day out with the Blue Oval next Summer.

Ford UK have their very own YouTube channel where amongst other clips you can find UKMT’s finest being flung around by the aforementioned Paul Swift as well as other movies from the day.

You can also join Ford Kuga on Twitter at http://www.twitter.com/fordkugauk where you’ll find them to be a most amiable bunch.
Alex Wakefield & Frances Lumm