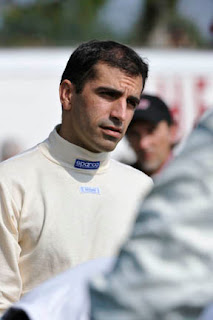 Sunday is always seen as The Big Day at The Revival.

For example, just one hour from now, the TT Celebration – a one hour, two driver race similar to the Le Mans format with two drivers per car will be waved off at 2 o’clock.

This grid of GTs features cars that raced at Le Mans in the early 1960s and are now reputedly worth in excess of £50 million pounds collectively.

And this year is expected to be once more a recreation of those Ferrari versus Aston Martin battles that took place at the beginning of the ’60s, featuring a hand-picked retinue of drivers, some from that very era, others plucked from the current Formula One grid.

This might best be illustrated by five-time Le Mans winner, Derek Bell lining up alongside Ferrari F1 test driver Marc Gene (pictured) in a Jaguar vs Ferrari Battle of The Titans.

The TT is the absolute highlight of the weekend for very many of the thousands of spectators who crowd the fences to see some awesome wheel-to wheel action.